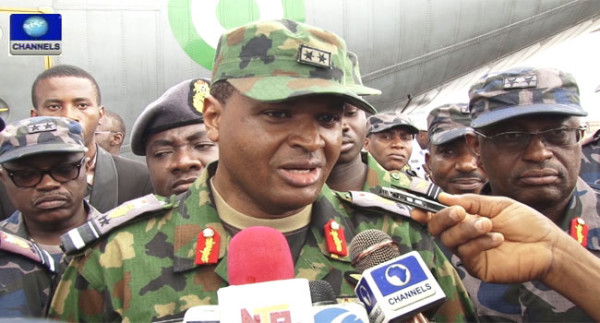 The Chief of Air Staff, Air Marshal Sadiq Abubakar, has asked men and officers of the air force to submit to civil authorities and protect the nation’s growing democracy.
Air Marshal Sadiq who is the Reviewing Officer of the Basic Military Training 35/2016 recruits at the Nigerian Air Force Base in Kaduna, during their passing out parade, Abubakar reminded the personnel that they were subject to both military and civil laws.

The Air Chief reiterated that the present administration of NAF was committed to the enthronement of professionalism.
“The NAF is confident that the revised curriculum of training given you all requires in terms of skill and training, to deal with these threats to the Nigerian internal security.”
“The rigorous military training you received was designed to prepare you for further specialist training and the challenging career in the Nigeria Air Force.”
He said that the NAF is presently acquiring several platforms and building capacity to ensure that the Service was adequately positioned to partner with other sister services to tackle these challenges.
“To man these platforms, we have sent 500 personnel to different parts of the world for training. We have also increased recruits training from 1,000 annually to 2, 500.”

On the security challenges in the country, Air Staff, Air Marshal Sadiq made it clear that the military would not allow any individual or group to undermine the sovereignty of the country, reminding the new officers: “you are coming into the service at a period of our nation’s involvement in Boko Haram insurgency in the North East and violent agitations by militants in the South South.
“The problems in the South South include vandalism of gas and oil infrastructure, oil theft, illegal bunkering, sea robbery, piracy and kidnapping.”
This was even as governor Nasir El-Rufai of Kaduna State pledged the support of his administration to the NAF and the military in finding lasting solution to the nation’s security challenges.
A total of 591 officers graduated at the ceremony. [myad]