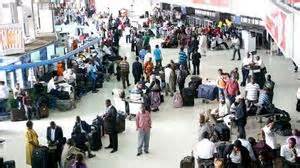 The workers embarked on a six hour warning strike to draw attention of Nigerian Airspace Management Agency (NAMA) to non-resolution of welfare issues that were raised last year and will go on indefinite industrial action starting from Monday, April 20 if their welfare issues are not resolved.
The airport authority has not yet made any official statement but the National President of the National Association of Air Traffic Controllers (NATCA), Victor Eyaru in a statement on Thursday said that today’s action will last six hours only as a warning sign.

“But it is in preparation for a major and total industrial action which will commence on Monday April 20, 2015, if relevant government bodies continue to treat air traffic controller issues with utmost levy or neglect.”
The warning strike has led to the cancellation of many flights. [myad]