Home NEWS Aisha Buhari Worries Over Increase In HIV Among Youths, As 47 Die... 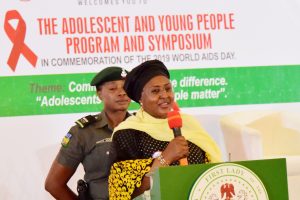 The First Lady, Aisha Muhammadu Buhari has expressed concern over the increase of AIDS amongst Nigerian youths, even as it is proved that no fewer than 47 AID patients die every day in the country.

Aisha Buhari, who spoke today, November 28, at the 2019 World AIDS Day at the Presidential Villa, Abuja stressed the urgent need for the government o to factor all relevant communities, including the HIV support groups and adolescent and youth communities into the strategies for preventing the spread of HIV.

She is worried at the trend of a growing number of young persons with new infections, especially girls with the implication of increased risk of having new babies born HIV positive.

“This trend will lead to higher chances of spreading the disease and invariably more deaths.

“Our younger generation, therefore, need to be aware and equipped with skills to access HIV prevention, testing, treatment and care.”

Meanwhile a global snapshot on HIV and AIDS released by the United Nations Children Fund (UNICEF), has established that more than 47 children and adolescents died every day from AIDS in Nigeria.

It said that low access to antiretroviral treatment and limited prevention efforts are the leading causes for these deaths, with only 54 per cent of children aged 0-14 living with HIV globally in 2018 – or 790,000 children – receiving lifesaving antiretroviral therapy.

The UNICEF Nigeria Country Representative, Peter Hawkins was quoted in a statement as saying: “progress has been made in the battle against HIV and AIDS, but we must do more, especially when it comes to Nigerian children and adolescents,

“Testing and treating for children and adolescents is a matter of life and death and we must choose life.”

According to latest global data, regional disparities in access to treatment among children living with HIV is very high, with West and Central Africa faring worst.

Access is highest in South Asia, at 91 per cent, followed by the Middle East and North Africa (73 percent), Eastern and Southern Africa (61 percent), East Asia and the Pacific (61 percent), Latin America and the Caribbean (46 percent) and West and Central Africa (28 percent).

Access to treatment by children living with HIV in Nigeria is only 35 percent.

Mothers’ access to antiretroviral therapy to prevent the transmission of the virus to their babies has increased globally, however, reaching 82 per cent, up from 44 per cent less than 10 years ago. This figure in Nigeria is 44 percent, up from 22 percent in 2009.

Peter Hawkins said: “it is good news that more and more pregnant women are receiving antiretroviral treatment to prevent mother-to-child transmission of HIV, which has helped avert about 2 million new HIV infections and prevented the deaths of over 1 million children under five years old around the word.

“But we need to see the same kind of progress in ensuring that children who already have the virus are receiving lifesaving treatment. HIV programmes need to be fully funded and equipped to preserve, protect and improve the quality of life for Nigerian children. We cannot and must not abandon these children,” said Hawkins.

Additional data from the report include:

To end HIV/AIDS as a public health threat for future generations, UNICEF is urging governments and partners to:

Improve HIV testing and treatment data for children and adolescents to better respond to the needs of this vulnerable population.

Invest in and implement effective and innovative interventions to urgently close the persistent testing and treatment gap for children and adolescents living with HIV.