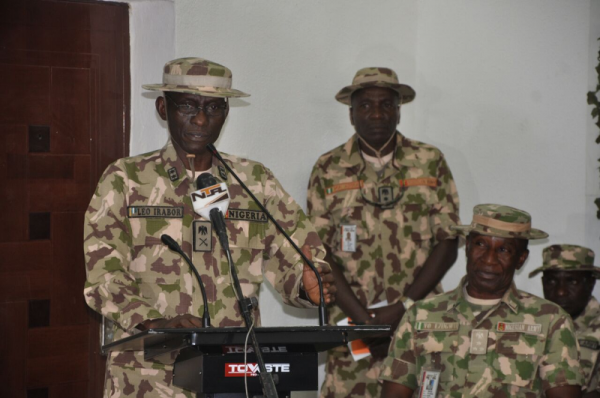 The Chief of Defence Staff, General Lucky Eluonye Irabor, has said that  a foreign media report alleging 10,000 illegal abortions by the Nigerian Army in the Northeast is fake news.

Speaking today, December 8, at the 61st edition of the ministerial briefing, organized by the Presidential Communications Team at the Presidential Villa, General Irabor said that the Armed Forces can never be involved in such scandals.

According to him nothing of such occurred during his time as Theater Commander of Operation Lafia Dole, the anti-insurgency operation of the military in the Northeast.

“I was informed by my Director of Defence Information that he received a mail from Reuters requesting to have an interview with me, he gave me a letter written by one Alexandra Xavis , making all manner of spurious allegations many of which have now been published by the same Reuters.

“When I went through, I asked myself how could man be so laden with evil to contemplate the content to which he want me to respond, I said he should go back.

“In that letter, he indicated 12,000 abortions have been conducted but they have now published yesterday that it is 10,000 and he went on say their sources, I said which source?”

General Irabor said that he was not in charge of the Northeast operation until 2016 when he was appointed Theater Commander, adding that such allegations are untrue.

“The allusions they made is news to me, it never occurred, I never saw anything like that, both from the decision center project, down to Mai Malari cantonment where I lived.

“We have seven hospitals that were our major hospitals for the treatment of our personnel and their families especially the wounded.”

The Army Chief reiterated that his officers won’t be deterred by malicious allegations, adding that Nigeria can never be involved in such things.

”I am not going to be deterred, I don’t think any of my officers are deterred, we will work as part of the security architecture of our country, and I am glad my Commander-in-Chief has absolute confidence in what I do, what we do, I believe Nigerians are also giving us the support that is required.

“I think Nigerians are better informed as to the disposition of the Armed Forces or relative to allusions of Reuters for them to take a stand and to know the military. The Nigerian Armed Forces can never be involved in such things.”

Reuters news agency had published a report, claiming that Nigerian Army was running a “systematic secret illegal abortion program in the Northeast, among women and girls who were kidnapped and raped by Boko Haram militants.