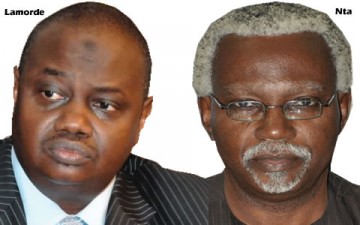 An Abuja High Court has ordered the Chairman of the Goodluck Support Group, Aminu Abubakar and Okechukwu Geoffrey to be remanded in prison custody on a 3-count charge bordering on extortion and conspiracy.
The accused persons were today docked by the Independent Corrupt Practices and Other Related Offences Commission (ICPC).
The accused persons pleaded not guilty to the charges when they were read to them and the prosecution counsel, George Lawal prayed the court for date to commence trial in the matter.
Counsel to the accused persons, E. A. Egbebu informed the court about his motion challenging the jurisdiction of the court to hear the matter and that the charges against the accused persons be quashed.
Prosecution counsel, George Lawal objected to the application on the grounds that the application was premature.
Egbebu, Counsel to the accused persons in his reply on points of law argued that since the motion is challenging the jurisdiction, the court is expected to hear it before arraigning the accused persons.
The trial Judge and the Chief Judge of the Federal Capital Territory (FCT), Justice Ishaq Bello over-ruled the submission of the defence counsel that the court should hear the motion challenging jurisdiction before the accused persons take their plea.
Justice Bello adjourned the matter till July 9, 2015 for hearing of the motion challenging the jurisdiction of the court filed by the defence counsel, while their bail application will be taken on June 11, 2015
Abubakar and Geoffrey (the accused persons) Abubakar was said to have been in possession of some documents relating to some officials of the Federal Ministry of Petroleum Resources, with the intent to implicate them if they fail to give him the sum of N50million.
It was gathered that, having sensed danger in what the officials later realised to be blackmail, they reportedly petitioned the ICPC through an intermediary.
The investigative team of the commission swung into action, coordinated a sting operation where the N50 million earlier solicited for by Abubakar was negotiated downwards to N25 million.
Abubakar was arrested with his accomplice at a garden in Abuja, after he had allegedly received N5 million out of the negotiated N25 million. [myad]