Home NEWS America Too Has Its Own Police Brutality, Secretary Of State Tells Buhari 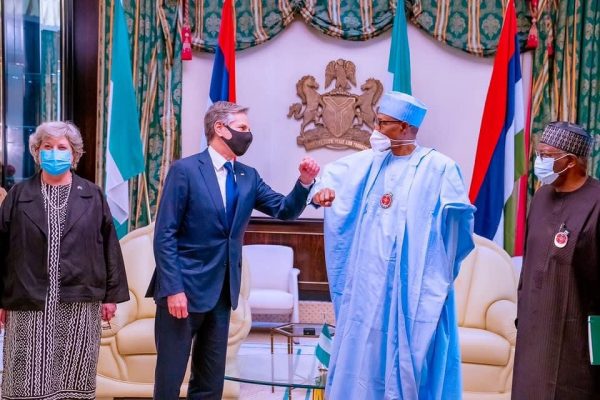 The American Secretary of States, Mr. Antony Blinken, has made it clear that his country too has its own fair shear of police brutal similar to what allegedly happened in Lekky, Lagos State in the wake of EndSARS protests last year.
Mr. Blinken said that America and Nigeria have diverse challenges, but that a common denominator is security, hoping for better partnerships, “so that the bad guys won’t get the good guys.”
The US Secretary of State spoke today, November 18, when he was received in audience by President Muhammadu Buhari at the Presidential villa, Abuja.
Mr. Blinken described the report of the EndSARS probe panel as “democracy in action,” but hoped that necessary reforms would be made.
He appreciated the contributions of President Buhari to protection of the climate, particularly his presence and contributions at the recent COP26 climate conference held in Glasgow, Scotland.
Mr. Blinken, who had held a virtual meeting with the Nigerian President earlier in the year said jocularly that it was now good to see him “mask to mask, hoping that we will soon see face to face.”
This was even as President Buhari said that the Federal Government will allow the system to exhaust itself, and will, therefore, wait for pronouncements from state governments which set up panels to probe police brutality in the country.
“So many state governments are involved, and have given different terms of reference to the probe panels,” the President added. “We at the Federal have to wait for the steps taken by the states, and we have to allow the system to work. We can’t impose ideas on them. Federal Government has to wait for the reaction of the states.”
On the recent removal of Nigeria from watchlist of countries violating religious freedom, which Blinken said was “based on facts,” President Buhari expressed the country’s appreciation, noting that there was freedom of worship in Nigeria, and no one is discriminated against on the basis of his or her faith.
The President equally appreciated the United States of America for allowing Nigeria to procure military hardware to fight terrorism in the country, and for the training given to Nigerian military.
“It’s helping us to stabilize the situation in the Northeast, and we’ve made a lot of progress since 2015,” he said. “We are doing a lot on security, and the people involved appreciate our efforts.”

Nigeria Writes To AfDB Board On Adesina: Don’t Bend Rules To Favour America