Home NEWS Amosun To Fayose: General Buhari Is Stronger Than You 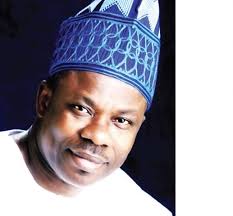 The Ogun State Governor, Senator Ibikunle Amosun has asked his Ekiti State counterpart, Governor Ayodele Fayose to keep his mouth shut over his continuous scathing remarks about the health status of the Presidential candidate of All Progressives Congress (APC), General Muhammadu Buhari, saying that Buhari is stronger than Fayose.

Speaking with journalists today after meeting with 705 community development associations and cooperative societies in the state at the June 12 Cultural Centre, Kuto, Abeokuta, said, Governor Amosun said: “it is a big shame from the quarters where the ‎allegation came from. We are Yoruba. There is an unwritten rule: t’aba n ja, bi ti ka ku ko (Even if we are quarrelling, it is not to wish each other dead).

“Even in this instance, we are not fighting. We want to represent our people. How can a sane person wish somebody else dead. It is a disgrace to our race as Yoruba for somebody to be wishing another person dead.

“For your information, General Muhammadu Buhari is even stronger than the character that is saying the man is weak; maybe because of the military background.”

Governor Fayose’s recent remarks came on the heels of the ongoing visit by the APC presidential candidate to the United Kingdom, where he met former Britain’s Prime Minister, Tony Blair, among other engagements.

The Ekiti State governor had alleged that Buhari had gone for a check-up on his alleged failing health, instead of a working visit as claimed by the APC.

But Amosun said it was not in the character of the Yoruba to wish anyone death.

Amosun, who was part of Buhari’s entourage to the UK, said he had to struggle to catch up with the 72-year-old retired General, despite his own age of 57.

“Even because of the way I walk, it’s like catching up with him. For his age, maybe because of his military background. It’s like seeing Baba Obasanjo too and say he’s old.

“Even when we went to Ben Television, I told him ‘you can’t follow me, you have to go home.’ He was willing, he was ready even in the cold. The man was walking round.

“You can see the photoshop they are using; they are saying a lot of rubbish. This is not politics. It is descending to an abysmal level and I think all lovers of democracy and all lovers of humanity should caution them.

“Politics shouldn’t be like‎ this; saying that he (Buhari) has three months to live. They are just talking rubbish.

“Politics will finish. Where would they be when you begin to talk this rubbish? I think it’s a shame and I think they are descending to a level that is unheard of, that negates reasonableness and good thinking. It’s against our tradition as Yoruba.” [myad]