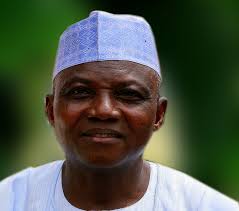 All Progressives Congress (APC) Presidential Campaign Organization has challenged the PDP government to tell Nigerians how much the National Security Adviser (NSA), Colonel Sambo Dasuki paid the Chatham House in London to deliver his speech in which he proposed election postponement.
Reacting to PDP allegations that APC bribed Chatham House to enable its presidential candidate, General Muhammadu Buhari speak, the APC Campaign organisation said that the Jonathan administration has taken propaganda to a ridiculous level of childishness, triviality and banality.
The APC Campaign’s Director of Media and Publicity Garba Shehu, said in a statement that any suggestion by the PDP that the APC had bribed Chatham House to get its presidential candidate speak was a reflection of the confusion, which attends a ruling party that has not only run out of ideas, but also out of popular goodwill.
According to Garba Shehu, any shamelessly corrupt government like the PDP always assume that everyone else, anywhere, is corrupt, adding that anyone that could imagine that Chatham House could compromise its prestige and integrity and allow itself to be financially induced by any party or politician does not understand how institutions operate in the U.K. and elsewhere in Western democracies.
“The psyche of the PDP administrations is so much invaded and infected by corruption that it judges the rest of the world by its own low moral standards.”
He said that by making unsubstantiated allegations of bribery against Chatham House, the PDP campaign has confirmed that lying is a way of life in the Jonathan administration, adding that nobody would take them seriously on this basis.
This is even as Garba Shehu accused the Jonathan-led PDP administration of using the opposing party as a whipping boy to divert attention from its woeful failures and broken promises, adding that APC was bemused by the allegations by the PDP National Chairman, Alhaji Adamu Mu’azu, that the opposition is behind the current biting fuel scarcity in the country.
Garba Shehu said that any ruling party that could lie through its teeth in order to mislead Nigerians automatically lacks the credibility to seek re-election.
He said that the marketers accused the PDP government of owing them N250 billion fuel subsidy, and because they have run out of line of credit, they have no choice but to stop the importation of fuel.
In addition, he said, the marketers also blamed currency devaluation, which they said, made importation unprofitable.
He said the APC is not in power and could not have been responsible for the current hardships facing Nigerians; including declining living standards, erratic power supply, biting fuel scarcity, poverty, unemployment and other harsh conditions imposed on Nigerians by Jonathan’s notoriously incompetent government.
Garba Shehu said that rather than looking for someone to blame, Jonathan must find an urgent solution to the current biting fuel scarcity, which he said is complicating the existing hardships of the ordinary Nigerians.
He made it clear that the consequences of incompetence is a driver of change, which he said is the main reasons Nigerians are eagerly looking forward to March 28 to see the back of the ruling PDP. [myad]