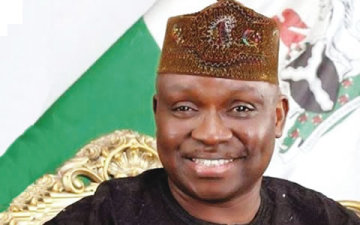 All Progressives Congress (APC) has queried the moral aspect of the Nigerian Supreme Court ruling confirming that Ayo Fayose actually won the June 21, 2014 governorship election in Ekiti state in accordance with the earlier ruling of the Court of Appeal.

The seven-man panel led by Justice John Fabiyi, had, in their unanimous ruling today,  upheld the appellate court and the State Governorship Election Tribunal, saying the grounds of the plaintiff prayers lacked merit.

Justice Sylvester Ngwuta in the leading judgment dismissed all the grounds of appeal filed by the petitioner – the opposition All Progressives Congress (APC) and subsequently resolved the four points of the appeal against the plaintiff.

Earlier, Justice Abdul Aboki-led five-man panel had upheld the ruling of the State Governorship Election Petition Tribunal, a development which resulted in the complainant to approach the apex court.

It would be recalled the Independent National Electoral Commission (INEC) early Sunday, June 22, 2015 declared Governor Fayose the winner, having scored a total of 203,090 votes as against former Governor Kayode Fayemi, of the APC who polled 120,433 votes in the election.

The Publicity Secretary of the APC in Ekiti State, Taiwo Olatubosun, in a statement, said even though the party had accepted the verdict because it had no choice, he said that there were moral issues arising from the judgment.

He noted that what flew from that judgment was that citizens can lie with ease under oath and get away with it, adding: “as at the time Mr. Fayose filled his form at INEC and lied he had never been indicted by any panel, no judgment had been delivered to reverse his impeachment until the Supreme Court verdict of today. This implies that it is profitable to lie and cheat as the end will always justify the means.”‎

“We had expected that the judgment will serve as a deterrent to the likes of Mr. Fayose who believes in impunity and extra judicial method of doing things. We are shocked that a man who did not allow a case of eligibility against him to be heard till today at the state High Court after assaulting judges and desecrating the judiciary would come out clean at the topmost temple of justice.
‎
“We know the law is an ass but we had expected that those who trampled on it will have their comeuppance but this was not to be.

“We accept the judgment of the Supreme Court as a law abiding party even though the moral questions it raised have refused to go.

“We call on our party members to be law abiding and not to despair. The present wind of change which is blowing across the country will soon be felt in Ekiti as there will be an end to impunity, brigandage and gangsterism.

“This is the time for our party members to come together and strengthen our resolve to rescue Ekiti from her present abyss under the iron grip of a dictator.”

But the Peoples Democratic Party (PDP) described the Supreme Court ruling upholding the election of Fayose as a triumph of democracy and the rule of law.

The party said the ruling was a testimony that the judiciary remains the last hope of the common man having sustained the wishes and aspirations of the people of the state as expressed in the June 21, 2014 governorship election.

The National Publicity Secretary of the party, Olisa Metuh, in a statement in Abuja, said that the ruling has given hope to the survival of democracy especially coming at a time when some officials of key institutions of democracy such as INEC and some security personnel have already started compromising their independence apparently under the dictates of an obsessive All Progressives Congress.

Metuh congratulated Fayose and the people of Ekiti State for their doggedness in the face of daunting challenges from those he described as anti-democratic forces and urged the governor to be magnanimous in victory while using his mandate to deliver good governance in line with the PDP manifesto and vision of its founding fathers.

He restated the PDP resolve to continue to stand shoulder-to-shoulder with the governor and the people of the state and vowed to resist any form of political intimidation or blackmail aimed at destabilising the state.

“In this regard, we warn all anti-democratic forces hiding in the state, especially the outgoing APC lawmakers, against any action intended directly or indirectly to destabilise the state or undermine this democratically elected PDP government under Fayose.” [myad]