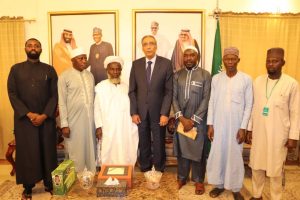 Authors of the Ebira-Qur’anic translation and members of the production/launching committee today, November 12, paid thank-you visit to the Ambassador of the Kingdom of Saudi Arabia to Nigeria, Adnan bin Mahmoud Bostaji in his office at Maitama District of Abuja, the Federal Capital Territory (FCT), for his presence at the launching of parts of the work on the translation early this year.
The Ambassador, who promised at the launching that his country would take responsibility of printing and mass producing the translated Qur’an, restated his commitment to see to the fulfilment of the promise.
He however, advised the committee to look for a local printer in Nigeria while his country would support with necessary funds.
He explained that taking for production in Saudi Arabia will involve a lot of protocols which may bring unavoidable delays in its final production.
The Committee’s Secretary, Ustaz Murtala AbdalRahman read the speech of the chairman, Alhaji Abdul Ganiyu in which the committee expressed gratitude to Ambassador for the roles he played and still playing in the process of producing the translated Qur’an.
The authors of the book are: Yusuf Ozi Usman (second from left), Sheikh Mousa Yousouf Onogu (third from left), Ustaz Ismail Abarigi (first right) and Ustaz Musa Ogaminana (second from right). Third from right is secretary and at the extreme left is a member of the committee, Malam Kabiru Isah Ademoh. 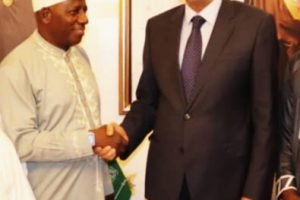 Ambassador Adnan Bostaji in a handshake with one of the authors and Editor-In-Chief of Greenbarge Reporters online and DIGNITY magazine, Yusuf Ozi Usman.