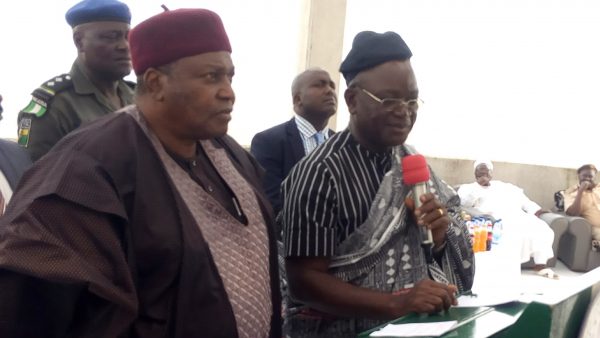 Governors Samuel Ortom of Benue and Darius Ishaku of Taraba States have resolved to grant amnesty to criminals operating along the border of the two states. The offer is part of the resolution at the end of the joint security meeting between the two states held today, Sunday, at the Federal University Wukari in Taraba State.

Governor Ishaku, who read the communique at the end of the tour of some border communities of Abako, Sai and Dogon-Gawa, said that the amnesty window took effect immediately and would expire by the end of January 2019.

“We are willing to give amnesty to criminals who are willing to renounce criminality and surrender their weapons so that we can give them better jobs and reintegrate them into the society.

“Criminals willing to surrender, including those that defaulted in the past are free to contact any of us (governors), traditional rulers and security agencies.

“Elections are around the corner and we will like to do this between now and end of January so that we can secure our places and synergise for peaceful elections.”

The meeting condemned the spate of kidnappings, armed robbery and banditry involving youths in the states at the border.

It stressed the need for job creation as a fundamental tool to reduce unemployment which made youths to take to criminality.

It called for adequate provision of logistics support to the security agencies by both the federal and state governments to sustain surveillance.

The meeting called on the people of the areas to report all forms of criminality to appropriate authorities and not shield criminals in their domain.

“The governors have resolved to constitute a joint security committee made up of people of proven integrity and locals of the area between the two states to address the security challenges and a joint security forces to be constituted with a police station at Sai.

“The joint security meeting mandates the Boundary Committees of the states in conjunction with the National Boundary Commission to meet and ensure that boundary issues involving the two states are resolved,” he said.

Governor Ortom called on the people of the states to report criminals in their domain to security agencies, be law abiding and shun acts capable of dividing them.

The security meeting was attended by heads of security agencies from both states, traditional rulers and top government functionaries from the states, including the immediate past governor of Benue, Dr. Gabriel Suswam.