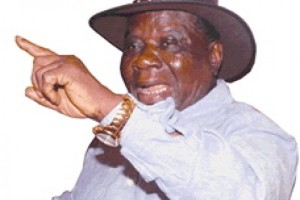 The group also described as “idiotic and foolhardy” a statement credited to the spokesman for IPOB, Emma Powerful, descending on the  national leader of PANDEF and South-South leader, Edwin Clark for saying that IPOB members were dreaming in their inclusion of Niger Delta in the Biafra Republic.

In a statement today, July 24 by its National Chairman, Senator Emmanuel Ibok Essien, PANDEF said that it is shameful that the promoters of IPOB could not differentiate between fact and fantasy.

Essien, who is a former Deputy Chief Whip of the Senate, said the irrationality demonstrated by IPOB would erode any sympathy they had hitherto received from the South-South geopolitical zone.

“Let us restate, without any equivocation, that the Niger Delta region is not part of Biafra and that no inch of the South-South geopolitical zone shall be part of any imagined “Republic”.

“It’s rather puerile for IPOB or any other group to consider that Niger Delta region would be part of any arbitrary contraption. If it becomes necessary for the Niger Delta people to pull out of this country, we shall do so, on our terms.”

The PANDEF chief reminded groups like IPOB that Clark is an elder statesman and iconic nationalist of repute with worthy credentials and unquantifiable contributions to national development, adding that his life had been a rich source of inspiration to many, within and outside Nigeria.

Essien said that IPOB elements should also learn the fact that Clark’s influence and significance were recognized beyond the South-South and the Niger Delta as he remained “an unswerving voice that resonates across Nigeria; for decades, speaking out against oppression, discrimination, and marginalization in the country.”

He noted that the Ijaw national leader, even at 94, had been committed and working with patriotic Nigerians, including the leadership of the apex Igbo socio-cultural organization, Ohanaeze Ndigbo, and eminent personalities of Igbo extraction towards the realization of a better Nigeria where equity, fairness and justice would reign.