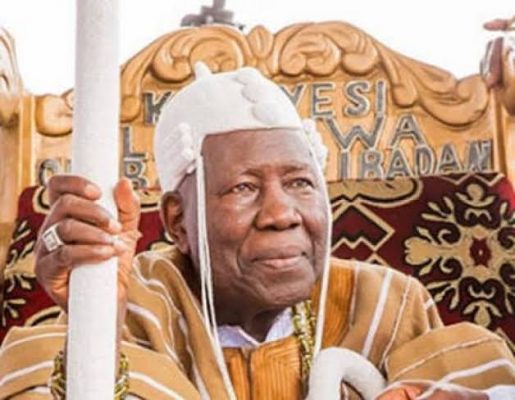 Apparently referring to the current attack on Fulani in parts of Oyo State by indigenes, led by one Sunday Igboho, the Olubadan of Ibadanland, Oba Saliu Adetunji, has cautioned against blaming and attacking a particular ethnic group for the security challenges in any part of the country.

The monarch, who spoke today, January 23, at the Royal Festival of Praise organized by the Holy Ghost Royal House of Restoration Church in Ibadan, emphasized that blaming a particular ethnic group for insecurity in the country would only further breed disunity in the country and should not be allowed.

Olubadan, who was represented by Mogaji Okiti-Aresa, Chief Adeshina Olatunji, appealed to farmers and herders in Ibarapa and Nigeria, in general, to live in peace.

He also called on Nigerians to support the security agencies in the country in tackling criminal activities and refrain from taking laws into their own hands.

Olubadan counselled religious leaders and traditional leaders to complement the government’s efforts by preaching unity in their domains.

”As leaders, it does not mean we are above God, traditional rulers, religious leaders should know that they are not God and we must lead our people in a Godly manner.”