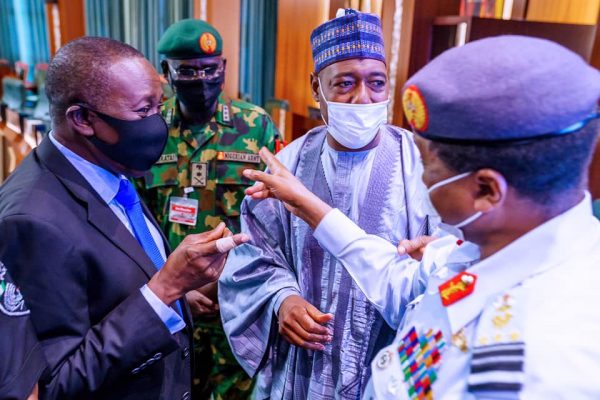 The Chief of Army Staff, Lt. General Tukur Buratai has admitted that Boko Haram insurgents have now converged on Borno State after being flushed out from other States in the Northeast.

At a meeting today, August 10 with President Muhammadu Buhari at the presidential villa, Abuja along with governors from Northeast, General Buratai said: “there are no Boko Haram terrorists in neighbouring states.

“They have been pushed out, and now converged on Borno State.

“We are coordinating with civil and traditional authorities, mobilising and reinforcing and all we need is patience.  We will not relent.”

This was even as the Chief of Air Staff, Air Marshal Sadique Abubakar, assured that  the imminent arrival of Unmanned Aerial Vehicles, UAVs, known as drones with more than 10 hours of flying time, would strongly reinforce the battle front.

In their address at the beginning of the meeting, the Northeast Governors said that the security situation in the region has now greatly improved, compared to the time the President assumed office.

The governors, who commended President Buhari for the establishment of the Northeast Development Commission and the take-off of Mambila Dam Power Project, however, called for attention to the condition of most of their roads.

They also warned of the consequences of a “War Economy” and the need to address the root causes of the insurgency.

“A large population in the region, especially in Borno State, have no access to their homes and farmlands,” while calling for efforts to curtail the “increasing trust deficit between the population and the armed forces.”