Home NEWS Boko Haram Leader, Shekau, Begs His Fighters Not To Desert Him, As... 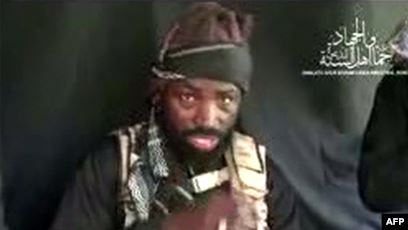 Abubakar Shekau, leader of Boko Haram terrorist organization, has pleaded with his fighters not to run away from battle after many of them were killed and weapons confiscated by the Chadian Army.
In his usual video clip delivered in a sober voice, Shekau, said: “People of Chad, leave us alone, this operation is not approved by the Qur’an. It is not the will of the Prophet Muhammed but if you want to continue, God will help us too because he is bigger than you.
“To my fighters, take heart. It is I, Abubakar Shekau, your leader.” He spoke in Hausa language.

The Chadian Army had killed score of  Boko Haram terrorists in its ongoing offensive, code-named: Operation Wrath Of Bohoma, led by the country’s President, Idriss Deby.
Chad, with the help of the Israeli Army, has mapped out the entire Lake Chad region containing both natural and artificial islands for the operation already yielding results.
The battle at Kelkoua, bank of the Lake Chad, saw the killing of many Boko Haram terrorists while bunkers hiding key commanders were discovered and destroyed.