Home FEATURES Bomb Explosions Are Back In Abuja, 15 Feared Killed In Kuje, More... 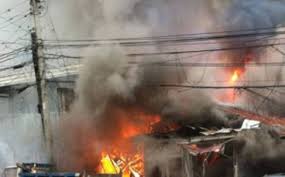 Months after the last bomb blast in the nation’s capital, Abuja, explosions are back again, as about 15 people were feared killed in one of the twin explosions in Kuje, capital of one of the Area Councils, last night.
Information reaching us indicated that more people were also killed and others injured in a blast which occurred simultaneously in Nyanya, the suburb of the capital city.
The explosions in Kuje occurred at about 10.00pm around the market side where hordes of commercial motorcyclists, known as “achaba” or “going” used to hang around waiting for prospective customers.
A resident who lives close to the scene of the explosion, Jafaru Abubakar narrated how he heard the sound of earth-shaking explosion at the time he was about to sleep.
“I woke up immediately and rushed to the scene. I found so many dead bodies littered around the place. It was a gory sight.”
The Editor-In-Chief of Greenbarge Reporters also narrated how, as he drove into Kuje from a trip to Lagos, policemen diverted him and other motorists away from the road leading to the scene of the explosion to an alternative road.
“Just as I approached the Kuje Secretariat, I heard another deafening sound of explosion. Even with the darkness of the night, one could see smokes from the explosion rising up into the sky from far.”

Meanwhile, the National Emergency Management Agency (NEMA), in a statement by Manzo Ezekiel, its press officer confirmed the explosion.

“Following the unfortunate explosions that occurred this night in Nyanya and Kuje, which are two satellite towns in the Federal Capital Territory Abuja, the National Emergency Management Agency has deployed its rescue teams in the evacuation of the victims to various hospitals.

“The explosions which occurred almost simultaneously have resulted in a number of deaths and injuries but the rescue operations coordinated by NEMA are still ongoing. Details would be made available later.

The source of the blasts was not immediately clear but similar explosions carried out by Boko Haram had hit Nyanya twice in the past.

This was as he Permanent Secretary of the Federal Capital Territory, Engr. John Obinna Chukwu, , has condemned in strong terms the twin suicide bomb blasts in Kuje, a suburb of Abuja late Friday.

Engr. Chukwu has commiserated with people of Kuje Satellite town, particularly those who lost their loved ones in the unfortunate and barbaric incident.

While also commiserating with the injured persons, the Permanent Secretary described the wanton destruction of lives and property as heartless and an act of wickedness on soft targets, which has “no place in our history and tradition”.

He assured that the FCT Administration would continue to work closely with the security agencies to ensure the safety of lives and property of all the residents of the Federal Capital Territory.
Engr. Chukwu thus, prayed for the speedy recovery of the injured persons.

The Permanent Secretary has however appealed the residents of the Federal Capital Territory to be more vigilant and report any suspicious person (s) or movement(s) to the law enforcement agents.

Meanwhile, the FCT Police Commissioner, Mr. Wilson Inalegwu, who confirmed the twin blasts in Kuje, a suburb of Abuja has also condemned the unfortunate act. [myad]