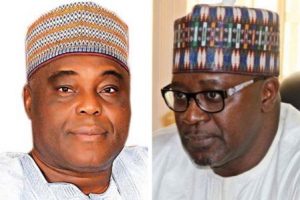 The National Broadcasting Commission (NBC) has shut down the African Independent Television (AIT) and Ray Power FM, belonging to the Daar Communications Limited, even as the owner of the media houses, Chief Raymond Dokpesi has kicked, asking President Muhammadu Buhari to sack  the NBC Director General, Malam Ishaq Modibbo Kawu.

At a news briefing today, June 6, the NBC boss said that the AIT and its Radio version were shut down after suspending their operating licences because they aired a Presidential election documentary when the matter is still pending before a tribunal.

Modibbo Kawu also accused the media houses of failure to pay the operating fees and that they used “divisive and inciting contents from the social media” among others.

Below is the full text of the press conference by Moddibbo Kawu:

Following monitoring reports and complaints from concerned Nigerians about the broadcast contents of Daar Communications Plc’s AIT/Raypower broadcast stations, the NBC have over the last 2 years  summoned on several occasions management of the company to address issues regarding the operations of AIT/Raypower with the company, particularly, Political Platform and Kakaaki aired on AIT.

In one of our meetings, held on 2nd June, 2017, the Commission expressed its disappointment with the way and manner Hate Speech, divisive and inciting comments are applied in discussion of national issues in breach of the provisions of the NBC Act and Broadcast Code.

Again, on 15th August, 2017, it became imperative to invite the company for yet another meeting on almost same issues.  Furthermore, while addressing another meeting on 7th February, 2018 we highlighted issues of concern to the Commission which indicated that the company had been breaching the provisions of Sections 3.1.2 and 3.1.3 of the broadcast Code.  The company’s delegates in their response promised to abate the breaches and comply with the law.

However, on October 18, 2018, the Commission was disturbed with the manner in which social media issues became part of  the mainstream media unedited on AIT/Raypower, and was constrained to issue a generic letter to all broadcast stations on the need to exercise caution in the use of user generated content from the social media knowing how volatile and misleading the social media has become. The management of Daar Communication Plc thereafter took to the social media to display our official correspondences.

Recently, the Commission’s monitoring reports on AIT/Raypower indicate the use of divisive comments accredited to the segment of “Kakaaki”, tagged, “Kakaaki Social”, where inciting comments like, “Nigeria  is cursed, we declare independent state of Niger Delta”, “Nigeria irritates me”, “this country is gradually Islamizing” and other similar slogans are used without editorial control in breach of the broadcast Code.  We were therefore constrained to issue Daar Communication letters of warning dated May 27th, 2019.

We also observed from monitoring reports that a documentary on the Presidential Election Tribunal, a pending election petition matter aired on AIT on Wednesday and Thursday, 22nd and 23rd May, 2019 without regard to the provisions of the Broadcast Code.  The Commission, in line with its regulatory powers again cautioned AIT in another letter also dated 27th May, 2019.

However, instead of making amends, the management of Daar Communications Plc resorted to the use of media propaganda against the regulator.  Even the letters from the NBC were posted on social media platforms.

Needless to state that Daar Communications have over the years turned themselves into a bad example of how a professional broadcast outfit should not be run.

In their relationship with the NBC, Daar Communications carry on, as if it is beyond the regulatory direction of the Commission.  They don’t pay their licence fees as and when due.

Its broadcast is patently partisan and one sided and deliberately inciting and heating the polity.  The management of the Company has created the habit of using the channel to fight its personal battles contrary to the statutory requirements of the law.

Today the 6th of June, 2019, AIT/Rapower embarked on use of inflammatory, divisive, inciting broadcasts, and media propaganda against the government and, the NBC for performing its statutory functions of regulating the broadcast industry in Nigeria.

Laws of the Federation of Nigeria and the Nigeria Broadcasting Code.

This decision is based on the provisions of Section 10 of the Third Schedule of the NBC Act Cap N11 Laws of the Federation of Nigeria, 2004, which states as follows:

(d) where in the opinion of the Commission the station has been used in a manner detrimental to national interest.

(g)   where there is wilful or repeated failure to operate

substantially as set forth in the licence

(i), where there is violation of or failure to observe any cease and desist order issued by the Commission;

(k), where a provision of the Nigeria Broadcasting Code has been seriously breached; and

The SHUT DOWN order is until further notice.

Reacting immediately to the development at a world press conference, Chief Raymond Dokpesi, alleged witch hunt of the AIT by Modibbo Kawu, asking the Presidency to remove him from office in the collective interest of the nation’s broadcast industry.

He described the actions of the NBC Director General as persecution of his media establishment, adding that there were deliberate moves by him to gag AIT and other privately owned broadcast stations in the country.

Dokpesi accused Modibbo Kawu of creating a siege mentality on the AIT and others and that he had turned the regulatory role of the NBC into a partisan weapon against private broadcast stations perceived not to be pandering to the whims of the government of the day.

Dokpesi said that despite intervention by notable stakeholders, including the Broadcasting Organisation of Nigeria (BON), Kawu has gone ahead to document the N500 million as debt owed by the AIT, insisting the amount be paid in one feel swoop.

He regretted that while his organisation has been remitting its licensing fees to the NBC up to date, Kawu has continued to harass and intimidate the AIT, even when public- owned broadcast organisations have not been meeting their financial obligations to the Commission over the years.

The media owner regretted that a man standing trial for alleged corrupt practices could still be harassing and frustrating law abiding organisations for no just cause.

“Ishaq Moddibo Kawu, was dragged to court by the Independent Corrupt Practices and other Related Offences Commission (ICPC) on a 12-count-charge bordering on fraud in the Digital Switchover Project of the Federal Government and members of his management at NBC have openly testified against him in court.

“Can this man remain independent of external and clandestine influences? Can the scandal he is embroiled in be used to influence his performance as a regulator?

“Is it possible that he will go the extra mile over and beyond the powers of the NBC to gain favour from politicians and powers who may have influence on whether to retain him as DG and offer him a soft landing on the charges against him?

“Is he a fit and proper person with the interest of the industry at heart to lead the regulatory body?

“Kawu must know that the right thing for him to do is to step down from the leadership of the NBC at least until such a time that he is acquitted of the charges against him. Do I need to tell him the right thing to do?

“Can the broadcasters he is regulating freely raise these issues against him as a public figure? I make bold to unequivocally call on the Federal Government of Nigeria to immediately relieve him of his duty at the NBC to allow the industry to breathe fresh air.”

Dokpesi linked his travails in the hands of the NBC boss to his status as an opposition figure, stressing that Kawu was being instigated against him by certain forces in the Presidency.

“Every broadcast which appears to them to offer a dissenting perspective to the position of government is reprehended as a threat to national interest.

“Every reference and reportage from various sections of the country concerning injustice, inequality and iniquity is reprehended as a threat to national security.

“If we are critical of this government’s commitment to the tenets of democracy, it is because we have witnessed unabated interferences, harassment and intimidation by the agencies under the executive arm of government on the institutions of democracy and their principal officers.

“This includes the leadership of the National Assembly, the Judiciary and now the Fourth Estate of the realm.”

According to him, the AIT management has always observed the right of reply whenever the government chose to respond to topical issues or to air its views on any issue of interest.

“We have never refused this government a slot to respond or to reply to these positions. We have, on the contrary, invited them times without number to appear for free to explain their positions and address the agitations of ordinary Nigerians.

“But they cannot determine what questions we ask them and what issues are off-limits.

“They must appear knowing that they are subjecting themselves to public scrutiny. The representatives of this government have largely not taken up the opportunity to rise to this challenge.

“Our obligation as provided for in Section 22 of the Constitution of the Federal Republic of Nigeria is to hold government, public officers and people in power accountable to the public.

“If AIT appears biased in propagating its editorial position, it is because the representatives of government have shied away from giving account of themselves on our platform and not because AIT denies the government opportunity to make their perspectives known to our audiences.”

Shortly after the press conference, Dokpesi led the management and staff of DAAR Communications on a protest to the National Assembly.

The protesters were received by a combined team of senators and members of the House of Representatives who assured them that the federal legislature would intervene in the matter with a view to protecting privately owned media organisations against oppression.

Guild Of Corporate Online Publishers Worry Over Shutting Down Of AIT, Ray Power