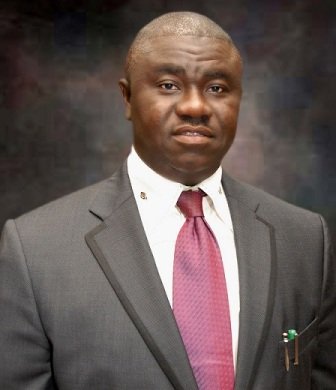 The Minister of State for Budget and National Planning, Prince Clem Ikanade Agba has expressed disappointment with Edo State Governor, Godwin Obaseki of trying to politicise project which his predecessor, Adams Oshiomhole undertook to control flood in Benin city, the State capital.
The Minister, who paid a royal homage on of the Oba of Benin, Omo N’Oba N’Edo Uku Akpolokpolo, Oba Ewuare II, in his palace in Benin city, pleaded with Oba to prevail on the State Government to give attention to the project, known  Storm Water Master Plan. It was started by the administration of Oshiomole to address the menace of perennial flooding in Benin City.
Clement Agba explained the idea behind the Storm Water Master Plan and the various processes that led to the award of the contract for the masterplan.
He said that the Storm Water Master Plan, which was aimed at combating the perennial flooding in Benin City, was the most significant and ambitious attempt yet.
According to him, since after the attempt by the administration of the late General Samuel Osaigbovo Ogbemudia to solve the problem, no other administration before Oshiomhole’s administration had done anything as significant as the Storm Water masterplan.
He advised that “nobody should play politics with the flooding problems of the city. The final solution to the flooding in many parts of the city requires up to 30 years of continuous implementation of the Benin Storm Water Master Plan as advised by experts.
On the N30 Billion Storm Water Project, the Minister said: “this represent money expended on the Uwelu East and West Water Storm project in the masterplan. The scope of Work including the construction of 9 roads one of which is a 7 Kilometer dual carriageway, all 9 roads with Street lights, walkways, sude drains and 7.5 Kilometers of diubke cell 3 meters by 3 meters underground primary drain and 7.9 kilometers of open trapeziadal drains.
“As at 2009, the Primary drains within the Storm Water Masterplan was estimated to cost about N300B. However the Oshiomhole government decided to prioritise and handle the projects one after the other in a holistic manner that will include the contruction of roads, secondary drains, walkways and streetlights.
“While the N30 Billion Uwelu East and West Storm Water project was 70% complete at the time we left office, 5 other Storm Water Projects within it had been 100% completed.  These are the popular 5 Junction, Upper Lawani street, Constain road, Airport Road, Second East Circular and the New Lagos road catchment area.
“It took the courage of a visionary leader like Comrade Oshiomole to undertake the projects by refusing to play to the gallery. Most of the executed projects were not for public relations, which, unfortunately  most public office holders either covet or indulge in.
“Your Royal Majesty, the present government in Edo State should be encouraged to continue the implementation of the master plan in the interest of the people.”
The minister also commended the Benin Monarch for leading the Edo Traditional Council’s delegation to President Muhammadu Buhari to request for two ministerial slots for Edo State.
He said that he was happy to be one of the proud beneficiaries of the royal intervention with his appointment as a member of the Federal Cabinet.
The minister solicited for prayers for the President who, he stated, had succeeded in returning the country’s budget cycle to a January to December model.
According to him, the January- December budget cycle would be the first since the return to democratic rule in 1999.
The Benin Monarch congratulated Prince Agba on his well-deserved appointment and requested him to convey the prayers of his ancestors for President Muhammadu Buhari’s wellbeing and success in office to him (President).
Among the gifts presented to the Oba by the minister was a framed picture of the Storm Water Master Plan, which he said was for the purpose of institutional memory.