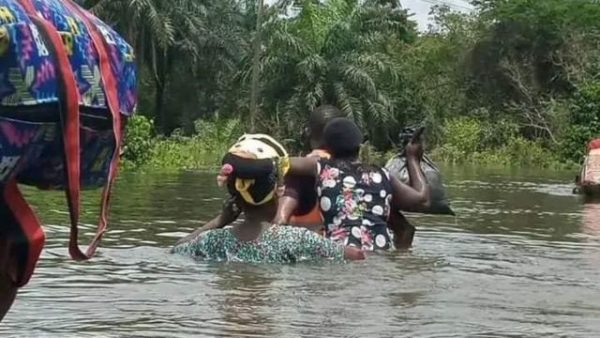 President Muhammadu Buhari has commandeered all federal agencies dealing with rescue and disaster management to go on rescue mission in Bayelsa State where flood has displaced 700,000 persons. The people were displaced from about 300 communities and villages in five of the State’s eight local government areas

Reacting to the devastation today, October 16, in a statement by his senior special assistant on media and publicity, Malam Garba Shehu, the President expressed sadness over the incidence.

He extended the nation’s condolences to the families of the victims and all those affected by this natural disaster.

He acknowledged that authorities in the State are taking steps to help people hit by the floods, but insisted that all relevant federal agencies should immediately proceed on rescue mission.

President Buhari however blamed buildings on water channels, disregard for early warning by the National Emergency Management Agency, NEMA, and the changes to weather caused by climate change as chiefly the causes of the floods that have so far hit 33 of the nation’s 36 states, as well as the Federal Capital Territory.

The President directed all concerned to work for the restoration of normalcy throughout the affected parts of the federation.