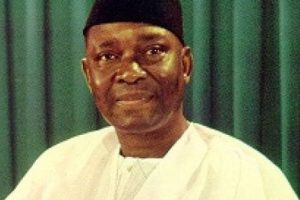 President Mohammadu Buhari has extolled the virtues of the late Dr. Nnamdi Azikiwe who he said would continue to be alive in the minds of Nigerians yet unborn.

Buhari, who spoke today, Thursday, while inaugurating The Zik Place, otherwise known as  Zik Mausoleum and Conference Centre in  Onitsha, said that the Mausoleum would promote nationalism, patriotism and public service.

He said that  Zik’s memory would be indelible in the hearts of generation yet unborn for his selfless service in national development, adding: “this is meant to honour the memory of Dr. Nnamdi Azikiwe, the Owelle of Onitsha, the Zik of Africa and Nigeria’s first President and one of the country’s foremost nationalists.

“As I reflect on Zik’s life and all of what he achieved, I acknowledge that Zik does not need this house, it is we who need Zik’s name to give this house meaning and importance.

“Therefore like many who live in our hearts, the great Zik of Africa, the Owelle of Onitsha will remain evergreen.”

This was even as Governor Willie Obiano of Anambra State commended  Buhari for keeping his promise and completing the mausoleum within a short period of time.

Obiano said that the mausoleum would become an important landmark In Eastern Nigeria and would add to the tourist attractions in the nation.

The governor called on the federal government to declare every November 16, a National Day in Nigeria, in honour of Zik’s birthday.

On his part, the Minister of Power, Works and Housing, Babatunde Fashola, noted that the project was abandoned by the previous administrations.

Fashola said that 96 workers were engaged in 2016 when work on the Mausoleum was resumed by the Buhari administration to ensure completion of the project in 2018.

He noted that the federal government under  Buhari would ensure the completion of the second Niger Bridge, Enugu-Onitsha Expressway and federal secretariat, Awka, in the state capital.

The Obi of Onitsha, Igwe Alfred Achebe, on his part, described the late Azikiwe as an important figure in national development and history.

He called on the federal government not to abandon the project “at this stage.”

Achebe suggested that a board of directors be appointed to oversee the activities and progress of the Mausoleum and conference centre.

Speaking, one of Zik’s sons, Ambassador  Emeka Azikiwe commended President Buhari for what he called  “the wonderful legacy” he had kept.

He recalled that his late father contributed “immensely to the country’s independence, democracy and national development.”

While expressing gratitude over the development, he said the mausoleum would serve as a tourist centre while at the same time, immortalise his father.

“We must not only commemorate the sacrifices of our true national heroes, we should also endeavour to work towards oneness and togetherness to achieve unity, peace and the reclamation of our dear country”.