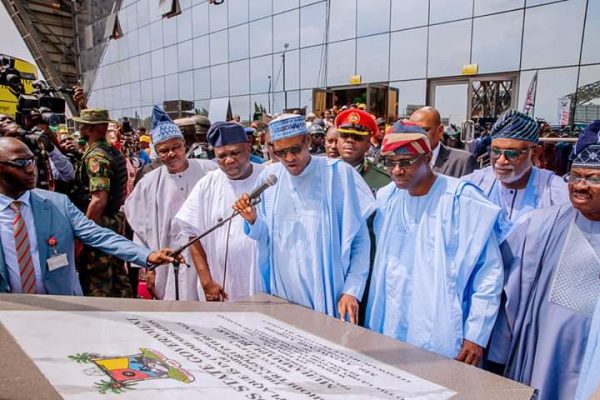 President Muhammadu Buhari has commended Governor Akinwunmi Ambode for the contributions he had made in the last four years to the growth and development of Lagos State.

He told Lagos people: “Your Governor, Akinwunmi Ambode, has performed satisfactorily and we should all commend him for his contributions to the growth and development of Lagos State.”

The President, who officially commissioned the new Oshodi Transport Interchange, the Mass Transit Buses and the Murtala Mohammed International Airport road in Lagos today, Wednesday, seized the opportunity to thank the people of Lagos State for their support for the government of the All Progressives Congress (APC).

According to him, the three key projects he commissioned in Lagos today reflected the drive and success of the APC government as it pursues policies and programmes that will positively impact on the citizens.

“The new Oshodi Transport Interchange; the Mass Transit Medium and High capacity public buses and the reconstructed Murtala Mohammed International Airport Road by Lagos State Government clearly demonstrate the need to continue to provide high impact projects for the development of infrastructure and opportunities for job creation at all levels.

See also:  Why We're Not In Hurry To Give Names Of Boko Haram Sponsors - Justice Minister

“Just as this transport interchange with three different terminals is going to change the face of public transportation, the mass transit buses totaling 820 will move the people of Lagos State in a more comfortable and more efficient manner.

“These projects by Lagos State are perfectly aligned with the efforts of the Federal Government to improve the country’s infrastructure especially in the transport sector.

“To compliment the Oshodi transport Interchange, the Federal Government has recently approved the reconstruction of the Apapa-Oshodi Expressway up to Oworonshoki and Old-Toll gate which was last attended to, 40 years ago.

“We have recently commissioned the new International Airport Terminals in Port Harcourt and Abuja as well as the rail lines from Abuja to Kaduna. The Lagos to Ibadan rail line is under construction. Our government will continue to prioritise high impact infrastructure which will vastly improve the lives of our people.”