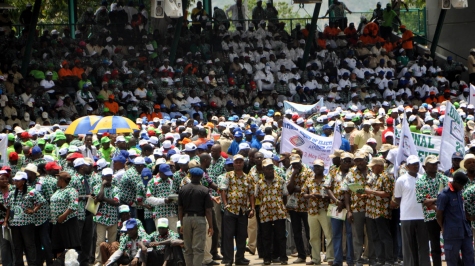 “Nigerian working class are among the worst hit social groups on account of poor living standards, a situation that is inconsistent with Nigeria’s vast oil wealth.”
The President-elect, General Muhammadu Buhari of All Progressives Congress (APC), who made this lamentation today in a solidarity message to Nigerian workers who celebrate May-Day tomorrow, added that the hardships being encountered by the Nigerian working class, is being compounded by poor governance and large-scale pervasive corruption in the country.
The President-elect, who extolled the sacrifices of the Nigerian working class in the face of economic tough times in their everyday struggle to survive also expressed dismay at the paradox of Nigeria’s oil wealth, characterized by rising poverty while a few corrupt officials are making themselves very rich at the expense of people’s wealth.
General Buhari equally regretted the fact that honest labour has been relegated to the background even as he warned that a country that sacrifices honesty in favour of quick wealth by whatever means cannot expect to achieve progress and respect in the eyes of other nations.
He reassured the Nigerian workers that his incoming administration would be fully committed to boosting the morale of the Nigerian workers in order to increase productivity and their income.
He explained that productivity is directly related to the development of the country’s economy, adding that his incoming administration would increase incentives for the Nigerian workers in order to boost their income.
He, however, appealed to the Nigerian workers to cooperate fully with his incoming administration in order to tackle the monster of corruption, which he said is the greatest enemy of development.
General Buhari advised civil servants against connivance with corrupt politicians and other public officials to divert public resources to private use. [myad]