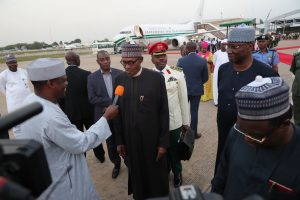 President Muhammadu Buhari has arrived in Daura, Katsina State, from Malabo, Equatorial Guinea where he attended a one-day 5th Summit of the Gas Exporting Countries Forum.

A statement today, November 29 by his senior special assistant on media and publicity, Malam Garba Shehu said that Buhari arrived the Umaru Musa Yar’Adua International Airport at 4.20 pm and was received by Governor Aminu Bello Masari.

The President, who is on a five-day official visit to the state, will on Monday participate in a ground breaking ceremony for the University of Transportation, Daura and commission the Kwanar Gwante (Shargalle Road), which is off Kano-Daura Road.

The specialized university, which will be built by CCECC Nigerian Ltd, will focus on research and development of human capital for the transport sector.

The statement said that the President will depart Daura on Tuesday for Kaduna.

Meanwhile, before he left Malabo for Nigeria, President Buhari signed an agreement on behalf of Nigeria with Iran to set up a bi-national commission that will promote trade, investment, agriculture and technology transfer.

The agreement came in the wake of a meeting between President Buhari and Iranian Vice President for Economic Affairs, Mohammad Nahavandian.

Speaking at the bilateral meeting, President Buhari said that he was impressed with the speed in transformation of Iranian oil and gas industry from what it used to be when he served as Nigeria’s petroleum minister in the 1970s.

“I will work very hard towards the joint commission. We will go back and identify sectors of common interest. In particular, we are interested in how you utilized your gas, with 95 per cent of your national population wired to gas.

“The evolution of our gas industry is too slow. We are still flaring gas. I will work with you on how to harness and utilize our gas. I am very impressed.”

President Buhari asked to be given up to second quarter of 2020 on the modality of the bi-national commission.

The President said that Iran also flared gas in the 70s, expressing his delight that the fires had all been put out. He expressed optimism that Nigeria would soon attain the same feat.

He recalled his close association as Nigeria’s oil minister with Iran, adding that if the blueprint he left behind as petroleum minister had been followed, Nigeria would have had 12 Liquefied Natural Gas trains by 1983.

“Instability and partisan politics thwarted all that, leaving us with just six, and the seventh we are now working on. We would have been earning more from gas.”

President Buhari said that the future of oil and gas is in value addition, even as he extolled Iranians for attainments in oil and gas, electricity generation, agriculture and petrochemical industry.

The President commended the Iranian defeat of ISIS in Iraq and Syria, saying the dispossession of the terrorists of their oil wells meant that they had lost access to resources used in supporting Boko Haram in Lake Chad sub-region.

The Iranian Vice President, who was emphatic that Nigeria and Iran can do a lot, said: “a lot can be done. We can do miracles. We have the vision.”

The Iranian Vice President also offered cooperation in counter terrorism, citing the routing of ISIS in Iraq and Syria as major contribution to the global anti-terrorism efforts.

He used the meeting to brief the President on the political and security situation in the Middle East region.