Home FEATURES Buhari Marvels At How His Media Team Been Able To Defend Him... 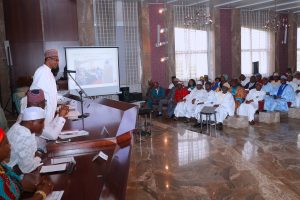 President Muhammadu Buhari has expressed surprise on how members of his Media Support Organization have been able to defend his government and him as a person in the face of well-financed opposition media attacks.

He said: “as I keep on saying, the opposition now are sitting on incredible resources which I am afraid we might not match it at all. For that reason, the opposition is sponsoring mischief from different angles which in spite of the incumbency of government we cannot absolutely stop.”

The President, who met with members of the media team today at the Presidential Villa, thanked them for their steadfastness under very difficult circumstances, admitting that it is not easy to defend his administration and more in particular to defend him.

“But your consistency has given me a lot of confidence. And I know you are doing it as a sacrifice both physical, mental and material. It is you that are fighting it and I cannot thank you enough for that. Most of the people I jailed have been given back all what they have taken before I was jailed. Most of those people that were being judged by various tribunals have given back what they have taken. I spent 18 months in detention and luckily they did not find anything against me and I was released.

“But my problem was that there was a journalist from Edo State who wrote an article against me. He wrote that my mother had to die to save me. Because I was only released when my mother died to go and bury her; of course, you know as a Muslim, traditionally, you are buried where you die.

“I am sure you are being asked this support you are busy giving Buhari what the hell do you get out of it?

“And that is why I commend your steadfastness and I am very grateful for it. And in this country, whether people like it or not, they will remain grateful for your courage because you have the courage to do the research, take your time to reply mischievous representation and we a are very grateful.” [myad]