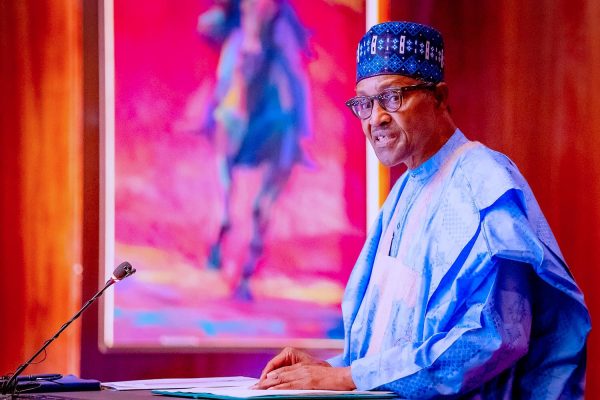 President Muhammadu Buhari has made a suggestion that the Public Complaints Commission (PCC) should be the best Agency to domicile the whistleblowing policy of the Federal Government.

The President was responding to requests by the Chief Commissioner of the Commission, Abimbola Ayo-Yusuf and members of the Management team during a courtesy visit at the Presidential villa, Abuja today, December 23.

The President said: ‘‘I want to assure you that the Commission would be considered as the Agency where the policy will be domiciled given your widespread network of offices and the fact that your mandate on referral of complaints with criminal contents to appropriate Law Enforcement Agencies make your Commission the best suited Agency for domiciling whistleblowing policy of the Federal Government.”

He thanked the Commission for conferring on him, the award of the GRAND OMBUDSMAN OF THE FEDERAL REPUBLIC OF NIGERIA, even as he pledged to continue to do his best in expanding the frontiers of anti-corruption, rule of law and good governance in Nigeria.

The President also promised speedy consideration of the Commission’s application to own a radio station to facilitate dissemination of its activities to the citizenry and to enhance its public enlightenment programmes.

On the 2023 elections and the need to protect the will of Nigerians, President Buhari urged the Commission to use their privileged position and network of numerous offices in all the States of the Federation and presence in many Local Government Areas to protect the interest of the down- trodden and sensitize the citizenry on their rights and obligations.

He underscored the role of the Commission in ensuring free, fair and credible elections and a smooth democratic transition and transfer of power in 2023.

‘‘The Public Complaints Commission is an Ombudsman Institution set up in 1975. The reason for its establishment by its founding fathers was to bridge the gap between the government and the governed and between the big man and the little man.

‘‘It was designed to act as a bastion of justice for the ‘little man’ who has no one or place to turn to for relief, just as it was conceived by the Swedes who originated it.

‘‘The mandate of the Commission is to principally attend to complaints by members of the public concerning the administrative action of any authority and companies or their officials.

‘‘This fits into this Administration’s policies of restoring transparency, accountability and zero tolerance for Corruption and all forms of administrative injustice.

‘‘I therefore promise to assist the Commission to provide the needed tools and infrastructure to strengthen and empower it to perform effectively’’.

On the honorary award presented to the President, Hon, Ayo-Yusuf praised President Buhari for releasing all outstanding pension liabilities, from 2014, to retirees of the Federal Government, especially those of the treasury-funded Ministries, Department and Agencies (MDAs), under the contributory pension scheme.

He added that the President also approved the payment of backlog of death benefits due to beneficiaries of deceased employees of MDAs.

Ayo-Yusuf also highlighted the President’s approval for payment of the 13 percent derivation deductions, for the nine oil producing states of the Federation, which has been outstanding since 1999.

‘‘Your excellency, these life-changing approvals are unprecedented in the history of governance in this country, hence, as a Commission with the responsibility to arbitrate and resolve public concerns, we deeply appreciate your support so far in solving the most sensitive issues that had bedeviled the Commission for a long time,’’ he said.

The Chief Commissioner also told the President that between July 1, 2021 when he assumed office with his colleagues and November 2022, a total of 125,064 out of 173,500 complaints have been resolved.

He said the complaints came mainly from the Nigerian work force and the downtrodden who ordinarily could not afford the cost of justice in the Nigerian Judicial System.

Making the case to become the hub of the whistleblowing policy and provide confidentiality for whistleblowers, Ayo-Yusuf said the Commission has over the years served as Chair of the Interagency Task Team on Anti-Corruption.

“We are able to secretly receive, investigate, process and refer cases from whistleblowers to relevant agencies for further investigation and prosecution while protecting the whistleblower.”