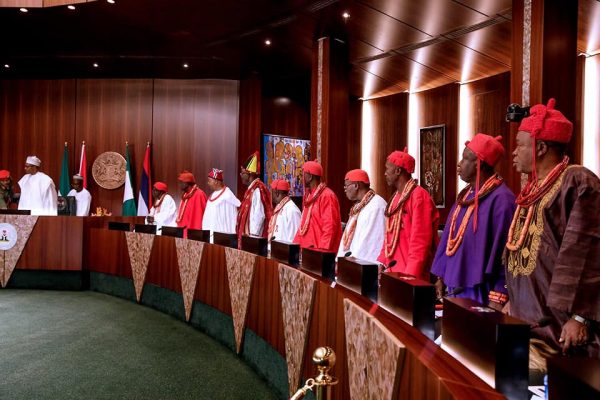 President Muhammadu Buhari has expressed surprise that Isoko people from Delta State are not well represented in the Federal Civil service despite that they are well educated.

President Buhari acknowledged that the Isoko kingdom had very qualified citizens that have distinguished themselves in various professional and entrepreneurial skills in the country.

The President, who received in audience today,  Friday, at the presidential Villa, promised that his administration will look into the issue with a view to addressing it.

“I will revisit your address and ask for clarification. I will do my best on this issue.’’

He also promised to look into the constitutional 13 per cent derivation benefit to the region to ensure even spread of developmental projects that meet the needs of the people.

President Buhari assured the royal fathers that the constitutional provisions for Niger Delta development will be carefully studied for inclusiveness, especially in the prioritization of Federal Government projects.

See also:  Buhari Thumbs Up For Traditional Rulers For Ensuring Norms, Cultures Are Not Eroded

“I have listened attentively to your address and I will still update myself with details of development in your area as it relates to oil and gas, and lack of infrastructure.

“I will look at the constitutional 13 per cent derivation and what previous governments have done, in order to know what we can do,’’ the President said.

The President General of the Isoko Development Union and spokesman of the traditional rulers, High Chief Iduh Amadhe, commended President Buhari for “performing well’’ in leadership, while urging him to consider some anomalies in the spread of development projects in the Niger Delta.

The Isoko Traditional Rulers and personalities were led to the Villa by His Majesty Ovrawah, Omogha 1, Odiologbo of Oleh.