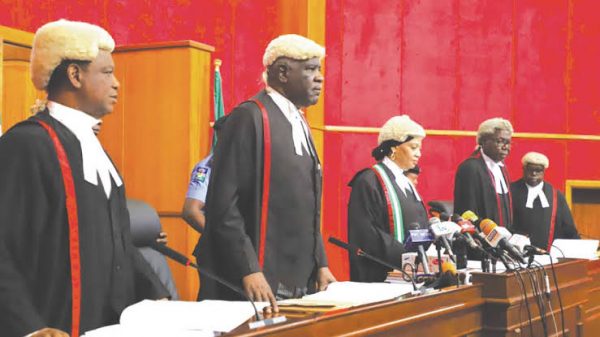 President Muhammadu Buhari has prayed the Presidential Election Petition Tribunal to dismiss the petition filed by the Peoples Democratic Party (PDP) and its Presidential Candidate, Atiku Abubakar against his February23 re-election.

Buhari made the prayer through his Counsel, Chief Wole Olanipekun (SAN), in a motion adopted and argued on Tuesday before Justice Mohammed Garba-led five-man panel in Abuja.

Olanipekun submitted that the petition was fundamentally defective, adding that his client won the presidential “square and clear’’.

He explained that the allegations advanced by the petitioners were mere theoretical assumptions that could not stand the test of critical legal debate.

The tribunal also entertained the president’s motion that sought to effect amendment on the identities and addresses of counsel representing him.

Another of Buhari’s application seeking to mandate the tribunal to entertain all interlocutory motions before the commencement of proper hearing of the main petition was also adopted and argued.

Similarly, the Independent National Electoral Commission (INEC) asked the tribunal to dismiss the petition brought by PDP and Atiku against a “flawless,” election that won by Buhari.

Yunus Usman (SAN), Counsel for INEC said that the electoral commission would standby the declaration of the second respondent (Buhari) as winner of the February 23 presidential election.

Usman said the petition challenging the outcome of the exercise was “misguided’’, adding that the allegations of fraud made against the electoral body was “mischievous’’.

INEC’s application is challenging the jurisdiction and competence of the tribunal to entertain the petition.

Usman urged the tribunal to dismiss the petition as the petitioners failed to include the vice president, Professor Yemi Osinbajo, as a co-winner in the election.

“ The failure of the PDP and Atiku to include Osinbajo’s name as party should not be overlooked because whatever affects the president affects his running mate,” Usman said.

Three other interlocutory motions filed by the All Progressive Congress were argued and dispensed with.

Chief Lateef Fagbemi (SAN), Counsel for the APC had urged the tribunal to strike out 18 paragraphs of the petition with frivolous assumptions among other prayers.

He submitted that the competence of the petition was questionable, adding that it would soon become a mere “lame duck’’.

Meanwhile, Dr Levi Uzoukwu (SAN), Counsel for the petitioners prayed the tribunal to discountenance all the arguments canvassed by the respondents, describing INEC’s position in the matter as “unusual”.

The presiding judge, therefore, fixed June 13 for the petitioners’ motions to be heard.