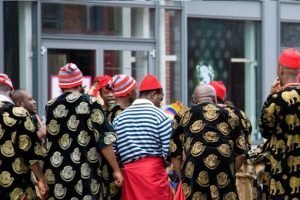 “We therefore, warn the leadership and people of Afara community to call their son, Nnamdi Kanu and his co-travelers to immediate order to avoid a battle they cannot withstand”

These were the word of warning by the youths from the Ukwa-Ngwa area of Abia State to the leader of the outlawed Indigenous People of Biafra (IPOB), Nnamdi Kanu for alleged disrespect to and threat to the life of the Governor of the State, Dr. Okezie Ikpeazu.

They alleged that Nnamdi Kanu had in a statement two days ago, told his members to “capture” the Governor, to face trial for the alleged role he played in the killing of #ENDSARS protesters in the state.

“Kanu, is also alleged to have given orders to his IPOB followers to attack the country home of the Governor in Umuobiakwa, Obingwa Local Government area of the state in the guise of #Endsars riots.”

Reacting in a statement, the Supreme Council of Ukwa-Ngwa Youths, an apex umbrella of Youth groups in the nine Local Government areas of the Ukwa and Ngwa in Abia State warned the IPOB leader that they would make life unbearable for Kanu and his cohorts if they do not retrace their steps.

They allege that Nnamdi Kanu’s minions were responsible for the destruction of property and deaths in the Ukwa-Ngwa Local Government Areas, Aba North and Aba South as “no government property was destroyed while the peaceful #EndSARS protests lasted in Umuahia, the Abia State capital and its environs.”

The statement, signed by Leader of the Council, Comrade Kelechi Nwaogwugwu, the Secretary, Uzochi Ikechi and Comrade Ugochukwu Ubani, read in part: “Our attention has been drawn to the plots and threats to attack the private residence of our Leader, Dr. Okezie Victor Ikpeazu, the Executive Governor of Abia State at Umuobiakwa in Obingwa Local Government Area of Abia by the fugitive leader of the Indigenous People of Biafra and his cohorts for no just reasons.

“We, by this announcement fiercely warn Kanu and his co-travellers to retrace their steps and have a rethink as we are very formidable and adequately prepared to resist them at all times and further take the war they are fanning to his own Afara community and hide-outs should he and his followers dare us further.

“The on going attacks on the 2 Ukwa-Ngwa Local Government Areas, Aba North and Aba South is a clear confirmation of the ethnic war against the Ukwa-Ngwa nation – hence no government property was destroyed while the peaceful protest lasted in Umuahia, the Abia State capital and its environs.

“It is against this backdrop that we wish to state emphatically that we shall leave no stone unturned in the defence of our Land and to retaliate accordingly within the shortest possible time.”