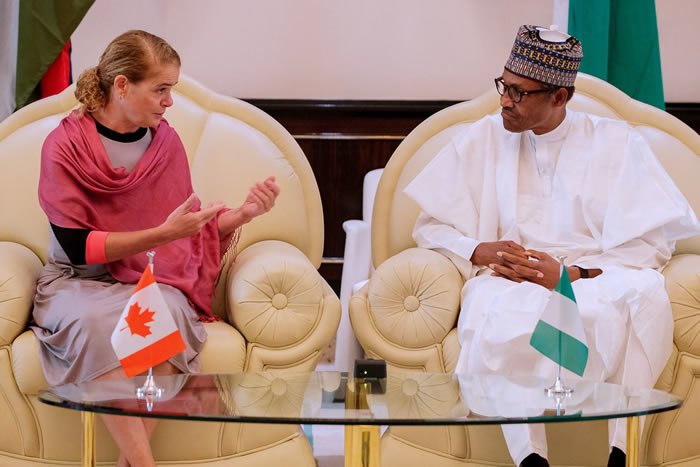 Canadian Governor General, Julie Payette has advocated what she called commonality of humanity from the point of view of the fact that from space, there are no borders.

Julie Payette, who is an astronaut, said when she visited President Muhammadu Buhari at the Presidential Villa, Abuja, today, Monday that it is important for nations to pool resources together to start exploring the benefits of space in providing solutions to some problems on earth.

According to her, the world would achieve more by de-emphasizing geographical differences and refocusing its energy on the commonality of humanity.

She said that from space one can only see an earth without borders, even as she said that her visit was about showcasing “youth, innovation and technology.”

The Governor General said that he country would like to partner with Nigeria in the ongoing diversification of the economy.

She praised the warm and strong partnership that has been existing between Nigeria and Canada, the partnership she stressed, that has translated into ease of migration, large trade relations and cultural exchanges.

She wished Nigeria free and credible elections in 2019.

This was even as President Buhari said that democracy is steadily improving in Nigeria with deeper understanding of the culture and tenets among the people.

He told the Canadian Governor General that relevant institutions are being strengthened with a view to guaranteeing free and fair elections.

According to him, Nigeria has been learning from the mistakes of those who practiced democracy for a longer period, and by looking inward at its own peculiarities, even as he added: “I emphasize free and fair elections at all times.”

The President said that the bilateral relations with Canada will continue to be improved considering the huge interest of the country in Nigeria and growing economic ties, with many Nigerians schooling and working in the country.

He acknowledged that Canada played a brotherly role in helping the displaced persons in the North East, following Boko Haram insurgency.