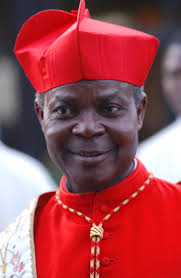 The Archbishop Emeritus of the Catholic Archdiocese of Lagos, Cardinal Anthony Okogie has advised the President-elect, Muhammadu Buhari, to beware of those he called wolves in sheep clothing, sycophants and political jobbers as he set to assume office on May 29.

Okogie in a statement today in Lagos descried such characters in the Nigerian political landscape as those who jumped ship to identify with the winning party.

“Now that the euphoria of electoral victory is over and with some days to the handover ceremony, the president-elect should get to work and hit the ground running without further delay.

“He does not have the luxury of time. He should not be distracted by the litany of requests, demands, recommendations, unrealistic expectations, and open letters at his table and in the media.

“He should also be mindful of the promises and commitments he makes as he receives delegations from different states, various bodies and interest groups.

“He should be wary of wolves in sheep clothing, sycophants and all the political jobbers who jumped ship to identify with the winning party,’’ the statement said.

“Yes, he will listen to all but must evaluate the motives, intentions and the principles underlying the request being made.

See also:  2 Terrorist Groups In Zamfara Fight Each Other To Finish

“As William Shakespeare succinctly opined `give everyman thy ear but few thy voice. Take each mans’ censure but reserve thy judgment.’’

The cleric also advised the President-elect to strive to fulfil his manifesto, saying: “before the elections, General Muhammadu Buhari, during his campaign, promised to fight corruption, provide security and deliver on the economy. These are key areas that he must address with immediate alacrity.

“If he keeps to his words and pursue these three pillars of his manifesto to their logical conclusion, Nigeria will surely witness a tremendous growth and development in its national life.

“He will not only succeed in steering the nation in the right direction, he will restore the lost dignity of government in Nigeria and deliver the dividend of democracy.”

Okogie reminded Buhari that expectations at home and abroad are high, and expressed confidence that though he is not a magician or miracle worker that would solve all of Nigeria’s problems in four years, but that he would make a great impact. [myad]