Home NEWS Chief Judge Of Nigeria Advises Judges Not Satisfied With Their Salaries To... 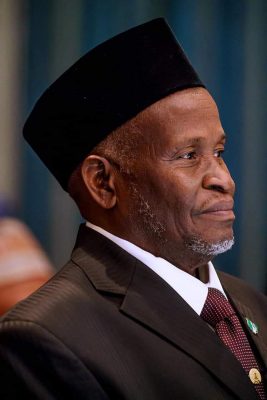 The Chief Judge of Nigeria (CJN), Justice Tanko Muhammad has advised judges that are not satisfied with their salaries and have to resort to bribery and corruption to look elsewhere for another job.
“Anybody who is not satisfied with the job and he wants money the judiciary or judicial line is not a place for money-making.”
Answering reporters questions shortly after being sworn in today, July 24 as CJN by President Muhammadu Buhari at the Presidential Villa, Abuja, Justice Tanko said that judiciary is a line whereby judges make a lot of name.
“You do what the law asks you to do and this is what we have been doing.”
He warned judges against what he called “go-between’, explaining that there are people who are posing themselves as go-between, “that is between a Judge and perhaps somebody who is standing trial.
“Don’t ever believe in that kind of thing except is told to him in the court, don’t believe in any subterranean way. Wait let them tell you this is the position of the law. This is what is happening.
“Some people are going round asking for money here and there. I’m sure any Judge or any Justice who is in his real sense can never ask somebody to go and collect money for him because he knows that he is being paid by government for what he does.”
Speaking on the government’s battle against corruption, Justice Tanko promised to use the judiciary to supporting the government in fighting corruption.
“We interpret the law and we come with better interpretation. If there is any case which is pending, I tell you that we have been speeding up any case that has to do with allegation of corruption. We speed it up so that if somebody is required to go to jail, he will go to jail and that is the end of it.
“And we will see that all these transcend down to the lower epoch of the judiciary so that even the Area Courts, Magistrate Courts will see what we do and they would be bound by what we do.
“And I’m telling you that the judiciary under my watch by God grace, will be better and the issues of all these kinds of corruption I will ask you people or any other person who knows about it to please let him write to me or let him have contact with me and tell me.
“But remember, the thing that is difficult is when we ask you to substantiate you will be able to substantiate. Don’t just make a hollow allegation that `we have heard….;  we have done…..’. Be sure that you are quite in possession of your facts. You will be able to establish when we ask you to establish your allegation and we will deal with it.”