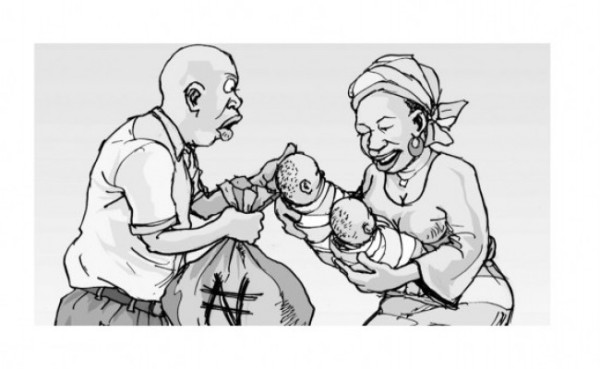 A middle aged man, Eze Onyebuchi and his wife, Oluchi Eze, are in police net in Ogun State for allegedly selling their one month old baby for N50, 000 to a human right activist, one Mrs. Ruth Obajimi.

The spokes person of the state police Command, Abimbola Oyeyemi, in a statement today, December 19 said that the couple, who reside at Ilara area of Ode Remo, in Remo North local government area, were arrested on December 16.

He said that the command had an information that the couple willingly sold their one month old baby to a woman who is now at large.

“Upon the information, the Dpo Ode Remo division, CSP Olayemi Fagbohun, detailed his detectives to the area where the couple were arrested and brought to the station.

“On interrogation, the suspects explained to the police that, it was one Mrs. Ruth Obajimi, who directed the yet to be identified buyer to them. They stated further that the woman came to them on December 14, 2021, and told them that she is from human rights office, and that she will help them to foster their child. The woman then gave them the sum of fifty thousand naira and they handed over the baby to her despite not knowing her from Adam.

“Effort is on top gear to apprehend the said woman with the view to recover the baby.”

The commissioner of police, Lanre Bankole, has ordered the immediate transfer of the suspects to the anti human trafficking and child labour unit of the state criminal investigation and intelligence department for further investigation.

He equally directed a massive manhunt for the buyer who has since disappeared into the air.