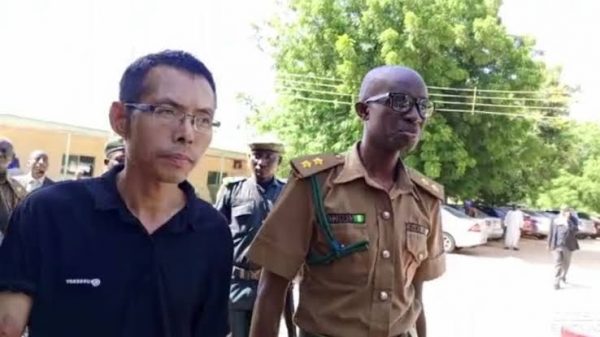 A 47 year old Chinese National, Frank Geng-Quangrong, who is standing trial for the alleged murder of his 22 year old girlfriend Ummukulsum Sani, has told a Kano High Court that he spent over N60 million on her.

Frank, who lives at Railway Quarters in the Kano city, is being tried for an offence contrary to Section 221(b) of the Penal Code.

The defendant, led in evidence by his counsel, Muhammad Dan’azumi, said that he is a Muslim, an international trader and a Marketer at BBY Textiles Kwari Market Kano.

“In June 2020 Ummukulsum got my phone number from her friend and called to tell me that she loves me, and by the grace of God, she will marry me.

“We started our relationship in July 2020 and she started asking for money. I gave her all she wanted because I loved her.

”I transferred over N60 million to her GT Bank account, N18 million for her to start a business, N4 million house and N6 million for University education among others.

“Whenever I go to pick her up for dinner at home her mum always welcomes me with open arms.”

Frank told the court that in February 2022, the deceased married someone else.

”I was heartbroken and disappointed so I relocated to Abuja.

“She kept calling me and chatting with me on Whatsapp and continued demanding money.

“Ummukulsum later told me she was divorced and asked me to come back to her and promised to marry me for the second time.”

He said tht on Sept.13, 2022, Ummukulsum asked for money to continue her house project in Abuja.

He said he told her that he does not have the money and she got very angry with him and stopped taking his calls.

“She thought I was broke that was why I don’t want to spend much money on her like before.

”She told me that she has found a new love and later sent her picture with the new lover on my WhatsApp which provoked me,” he told the court.

On December 23, 2022, the court had ordered the recall of Ummukulsum’s mother, police constable and Chief Medical Officer, for re-cross examination.

Earlier, the defence counsel, Dan’azumi, led in evidence asked Fatima Zubairu, the deceased mother if she took part in performing the funeral rights of her daughter.

“Did anyone tell you the kind of injury she sustained on her body?”

The mother said that she did not take it but was told she had 11 cuts on her body.

Dan’azumi also asked the police constable, Aminu Halilu, if he has ever seen exhibit 1 ( knife used in committing the offence).

“Can you remember the date you came across this exhibit? Did you recover it at the scene and were there blood stains on it?”

He said:  “yes I saw exhibit 1 on Sept.17, someone brought it to the station on our way to the SCID there was a stain of blood and visited the crime scene before I received the knife.

“I did not recover anything at the scene,” he said.

The Prosecutor, who is also the Attorney General of Kano State, Musa Abdullahi-Lawan, alleged that the defendant on Sept.16, 2022, stabbed the deceased with a knife in her house at Janbulo quarters Kano.

The defendant, however, pleaded not guilty to the charge.

Justice Sanusi Ado-Ma’aji, adjourned the matter until Jan.12, for the continuation of the defence.