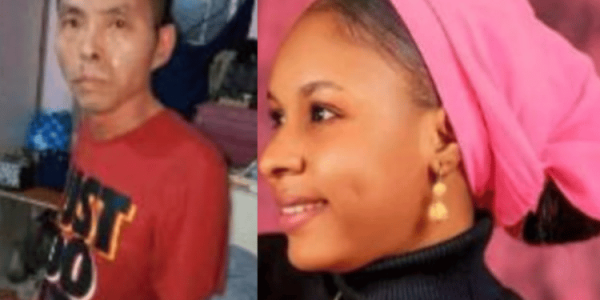 Police source said that the Chinese boyfriend had gone to see the lady at her parent’s residence located adjacent to the National Environmental Standards and Regulations Enforcement Agency (NESREA) office at about 10pm yesterday, September 16.

Confirming the incidence, the spokesman of the Kano Police Command, Abdullahi Haruna Kiyawa, narrated: “On 16/09/2022 at about 2200hrs, a report was received from Janbulo Quarters Kano that, one Geng Quanrong, ‘m’, 47 years old, of Nassarawa GRA Quarters Kano, a Chinese national, went to the residence of his girlfriend, one Ummukulsum Sani, ‘f’, 22 years old, had a misunderstanding with her, as a result, he attacked her with a sharp knife inflicting deep cut on her neck and some other parts of her body,” he said in a statement on Saturday.

“The victim was rushed to Murtala Mohammed Specialist Hospital Kano, where a medical doctor confirmed her dead. The suspect was immediately arrested.”

He quoted the commissioner to have “directed that the case had been transferred to the command’s Criminal Investigation Department (CID), Homicide Section for discreet investigation”.