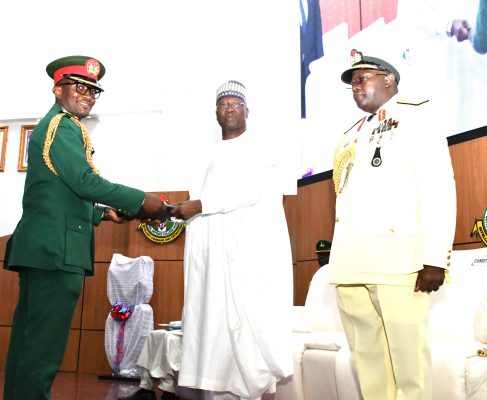 A serving Colonel in the Nigerian Army, Nicholas Ashinze, has won the ‘Brazilian Government Prize for the Best Project on Science and Technology.

Ashinze of the military intelligence corps, bagged the prize for an outstanding research project titled: “Digital Currency and National Development in Nigeria: E-Naira in Perspective.”

The Prize was given today, August 5, at the National Defence College (NDC), Course 30 Graduation in Abuja. The College, established in 1992, also celebrated its 30th anniversary.

See also:  I Will Not Allow Security Chiefs To Rest Until Insecurity Ends, Buhari Vows

Addressing the participants, President Muhammadu Buhari, said that he is deeply worried over the activities of bandits, terrorists and other criminal elements across the country.

The President, who spoke through the Secretary to the Government of the Federation (SGF), Boss Mustapha, the President lamented that the number of violent and unprovoked attacks on citizens has been on the rise, recently.

He described the situation as unacceptable, even as he tasked security agencies to deal decisively with enemies of the country, just as he assured the country that his government will continue providing maximum support to the military and other security troops, to curb the spate of wanton attacks on harmless citizens.