Home NEWS Constitution Makes It Illegal For Govt. To Save Funds In Federation Account-... 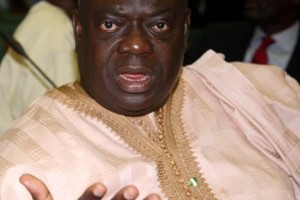 Immediate past Governor of Niger state, Dr. Muazu Babangida Aliyu, has said that Nigeria’s constitution does not provide for the federal government to save any income coming to the federation account, but that such funds should be shared amongst the three-tier of the government.

Babangida Aliyu, who spoke against the background of the criticisms of the past government of the Peoples Democratic Party (PDP) of not saving for rainy day during the economic boom, said that the government was handicapped by the 1999 Constitution.

According to him, what the constitution provided for was for all amounts of money generated to be put in the federation account and shared among the three tiers of government.

“The Constitution did not say we should save anything; what the Constitution says is that we should generate and share. It will be illegal for us to say we want to save; the law does not allow it.”

See also:  After My Second Tenure, I May Become A Pastor, – Gov Abiodun Of Ogun

Babangida Aliyu who chaired the second edition of the NDEDI Annual lecture series in Minna, Niger State today, Saturday admitted however that he and some of his colleagues were convinced at the time of the need to keep some money aside for eventuality, which brought about the establishment of the Sovereign Wealth Fund (SWF).

The lecture in Minna was theme: “The Emergence of the Current Economic Realities : Expectations on the part of government and the private sector.” [myad]