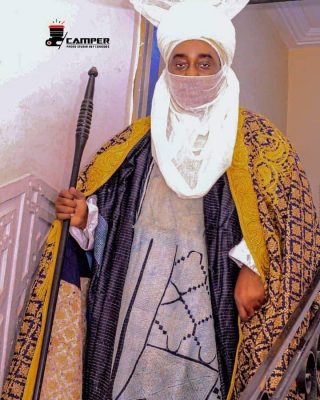 The topmost contender in the race for Emirship of Zazzau, Alhaji Bashir Aminu, has dragged Kaduna Governor, Nasir el-Rufai, the newly appointed Emir, Ahmed Bamalli, and the Zazzau kingmakers to court over the appointment of Bamalli as Emir.

Prince Aminu, who holds the title of Iyan Zazzau today, October 12, filed a suit before the Kaduna State High Court, seeking the court to remove the newly appointed Emir Bamalli and declare him (Aminu) the 19th Emir of Zazzau.

“Having scored the highest number of lawful votes cast by the kingmakers and thus selected by the said kingmakers, he has thus acquired a vested right to the stool of the Emir of Zazzau from the date of his selection henceforth.”

Governor el-Rufai jettisoned the initial recommendation of the kingmakers and ordered a fresh process where 13 princes were screened by the kingmakers.

The Governor’s move was greeted with allegations that he was attempting to favour Bamalli, his alleged preferred candidate for the throne.

After the kingmakers repeated their recommendation of the initial three princes, El-Rufai appointed Prince Ahmed Nuhu-Bamalli as the new Emir.

A copy of the suit made available to newsmen in Kaduna seeks: “An order setting aside the purported appointment of the 10th defendant (Ambassador Ahmad Nuhu Bamalli) as the Emir of Zazzau;

“A declaration that the plaintiff is still the Emir of Zazzau and is entitled to all rights and privileges pertaining thereto.

“An order of perpetual injunction restraining the defendants either by themselves, agents, privies, servants or through any person or persons howsoever from treating, presenting or dealing with or installing the 10th defendant as the Emir of Zazzau.”