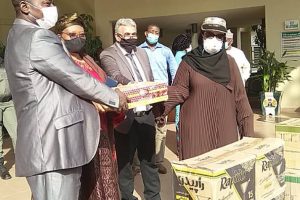 A private enterprise, 4U Supermarket, has donated palliatives to the Federal Capital Territory Administration (FCTA) to assist the poor and the vulnerable in Abuja, as the lock-down due to the coronavirus disease continued nationwide.

The donations by 4U Supermarket, formerly known as Amigo Supermarket, were made yesterday, April 22 by Barrister Hadiza Aliyu on behalf of the group and were received on behalf of the FCTA Minister, Mallam Musa Bello, at an event held at the FCTA head office, Area 11, Garki, Abuja.
The items donated included food stuffs such as rice, indomie noodles, spaghetti, sugar, milk, etc.
The super market representative, while speaking at the event, explained that it took the action as its own contribution towards mitigating the situation in the FCT communities caused by the lock-down due to the virus.
Receiving the donation, the Minister of State for the FCTA, Dr. Ramatu Tijani thanked the management of the supermarket for its kind gestures describing the action as patriotic and a commendable one.
Palliatives are being given to the public to cushion the effects of the coronavirus lock-down across the nation.
Dr. Tijjani  Aliyu had on behalf of the Minister, flagged-off the distribution of the palliatives materials in the six area councils early in April.
The first batch of the distribution, which started in Abaji and Kwali area councils, continued in Kuje and other area councils and is made up of foods stuff shared out to the less privileged in the society.
More and more private organizations and individuals have donated palliative items to the FCTA for distribution across the territory.
The distribution of the items is still on-going.