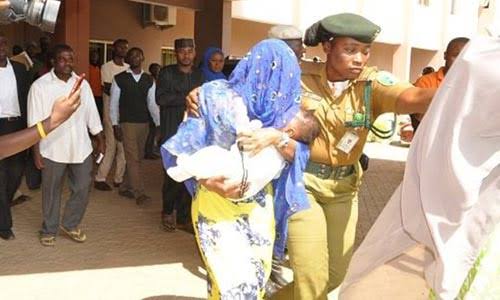 An Abuja High Court has sentenced Maryam Sanda, the woman who stabbed her husband to death, Bilyaminu, son of a former national chairman of the Peoples Democratic Party (PDP), Haliru Bello, to death by hanging.
Delivering judgment, Justice Yusuf Halilu, held that Sanda failed to explain the death of her husband being the last person with him.
Halilu held that there was no room to acquit Sanda based on the evidence and surrounding the circumstance.
The killing was premeditated, the police said.
Read Also: Woman Locked Up For 2 Years In Kaduna Regains Freedom(Opens in a new browser tab)
The police accused Sanda of stabbing her husband with a broken bottle at about 3:50 a.m. on Nov. 18, 2017
The police also accused Maimuna Aliyu, Sanda’s mother; Aliyu, her brother, and Sadiya Aminu, her housemaid, of tampering with evidence by cleaning the blood and other proofs from the crime scene, but charges were later dropped. Source: NAN.