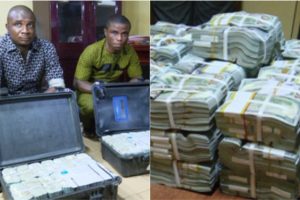 Two men who were caught with $2.8 million cash at the Akanu Ibiam International airport, Enugu by officials of the Economic and Financial Crimes Commission (EFCC), have implicated Union Bank Plc.

The suspects, identified as Ighoh Augustine and Ezekwe Emmanuel, who also claimed to be workers of Bankers Warehouse, confessed that they have been in the business of conveying such money for banks in the last six years.

“We have been conveying such cash for some notable banks, for over six years and we are in the process of doing same for Union Bank Plc, located at New Market, Onitsha, Anambra State, when we were caught.”

According to the EFCC, the two men concealed the cash in two suitcases, containing $1.4 million each.

A statement by the commission said that the suspects were arrested at the departure lounge of the airport yesterday, Thursday night while about to board an Arik Air flight to Lagos.