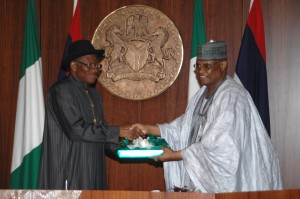 Chairman of the Presidential fact-finding committee on the abducted female students of the Government Girls Secondary School, Chibok in Borno state, Brigadier General Ibrahim Sabo has said that so far 57 of the kidnapped gilrs have returned and reunited with their families.

The chairman who submitted the committee’s report to President Goodluck Jonathan at the Presidential Villa, Abuja today acknowledged that there are still 219 in the Boko Haram captivity.

The students were abducted from their school premises by members of the dreaded Boko Haram in April.