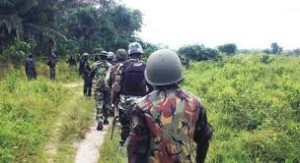 Nigerian minister of information, Labaran Maku has said that President Goodluck Jonathan and top government and security officials have been going through a lot of anguish since over 200 female students were kidnapped in Chibok, Borno state by members of the deadly Boko Haram over a week ago.

The minister, who addressed newsmen today shortly after the weekly Federal Executive Council (FEC) meeting at the Presidential Villa, Abuja described the abduction of the girls as a national tragedy.

It is a tragedy, he added, “that young girls of school age could be abducted in our country in 2014. It is unimaginable, nobody even in our wildest imagination think that a group of people under whatever guise will take young girls who are just in the school to write exams hostage. This is indeed very painful. From the President and all of us, we have been going through a lot of anguish. It is almost like a story out of this world. It goes to show the level of depravity, share current of lack of human feeling that is going on in this crime of terror in this country.”

He said that security forces are still on the heels of the kidnappers and that every effort is being made to get the girls back safely.

“The work of defeating terror is in being united. And I appeal to citizens who have information that can lead to fishing out these girls and other criminals in the system to give that information. Our prayer is to get them safe and that they will not be abused by those who criminally abducted them. The attention of the world, the president and governors on the search of those girls and a lot of work is going on‎. It is the number one priority today in terms of synergy and we will continue to call for public cooperation.

This is even as women in Borno state have expressed their willingness to go into the notorious Sambisa Game Reserve Forest, the enclave of Boko Haram to seek the release of the abducted schoolgirls of the Government Secondary School, Chibok.
Sambisa Forest, a large expanse of land is where most of the deadly attacks of the Boko Haram insurgency are launched from and it is where the abducted schoolgirls are believed to be held hostage.
The coalition of various women association in the troubled state told newsmen today: “We are ready to go into the bush and appeal to the Boko Haram sect to release our children to us.”
The coalition is being led by Professor Hauwa Abdu Biu.

According to the women, they are now waiting to be led by the military into the notorious forest.

Your Divisive Rhetoric, Insults Won’t Give You Victory At Polls, Presidency Tells PDP