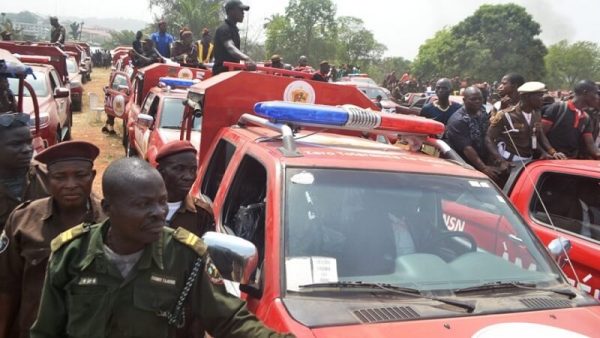 An operative of the Oyo State Security Network Agency, Operation Amotekun, has been arrested for allegedly shooting a policeman.
The incident occurred over the weekend at Sanga area of Oyo town around 3pm during a carnival.
The Amotekun officer, Ibrahim Ogundele opened fire on Fatai Yekini, a special police constable, when the police team from Ojongbodu arrived at the scene of the carnival to drive those gathered there away.
Oyo State police spokesperson, Olugbenga Fadeyi said that the Amotekun operative is being held for further questioning while the policeman is currently receiving treatment in an undisclosed hospital.
“This happened when policemen at Ojongbodu Division, Oyo were responding to calls to dislodge recalcitrant youths staging carnival after several warnings that such should not be staged.
“The Amotekun personnel has since been arrested and currently being investigated at Ojongbodu Police station.”
Source: Qed.ng

Amotekun: Afenifere Opens Fire On Tinubu, Says His Statement Is A Pile Of Waffle