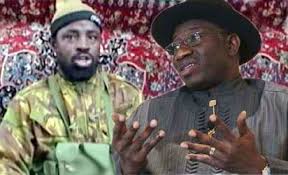 President Goodluck Jonathan may have been subdued by pressure as he has now extended emnesty to members of the deadly Boko Haram, on condition that they lay down their arms and turn themselves up for peaceful dialogue.

According to the nation’s Minister of Youth Development, Mr. Boni Haruna, the amnesty is part of President Jonathan’s administration’s youths-friendly programmes and policies.

Haruna who spoke today while giving an overview of youth’s position in the present administration’s transformation agenda at a special event tagged “A day with young leaders of Nigeria” to mark the nation’s Democracy Day in Abuja said that series of integration programmes have been lined up for members of the sect who would surrender their arms and embrace peace.

“President Goodluck Jonathan has also declared amnesty for members of the Boko Haram sect. Series of integration programmes have been lined up for the members of the sect who would surrender their arms and embrace peace.

“Let me use this opportunity on behalf of the Federal Government, to call on the members of the Boko Haram sect to embrace the government’s gesture and key to amnesty programme.”

He recalled that in the wake of youth restiveness in the Niger Delta, the government came up with a development programme which provided an opportunity for the youth to express themselves and have a meaningful life.

Haruna said that although the amnesty programme was a fallout of a bitter national security, its effect on the youth had been profound.

He disclosed that 30,000 youths have benefitted from the programme which has seen beneficiaries transforming from militants to wealth creators, employers of labour and skilled citizens.

President Jonathan, who was at the occasion answered questions from youths , saying that military alone is incapable of stopping terrorism or any kind of radicalism, adding that terrorism cannot succeed in any community without local supports.

He stressed the need for people who are respected by the insurgents to join hands with government to persuade them to desist.

“Terror succeeds with local support. It will be difficult for terror to thrive where people reject it. It is a major challenge to all of us. Military alone cannot stop terror or any radicalism. Terrorists have people they respect, they have community, traditional and opinion leaders they respect. All of us can deradicalise them.

“We will through persuasive activities encourage people to shun violence.”

He said that his government is already working out the modalities for reintroducing moral education into school curriculum.

This, he said, would assist in re-orientation the young people in order to distinguish between right and wrong things.

Jonathan promised that his administration would continue to encourage young people because they are no longer leaders of tomorrow but of today.

He said youths are already leading because they decide who rules at all levels of government by virtue of their population which he put at 60 per cent of the electorates.

The President also reiterated his position that the nation’s income distribution was skewed. [myad]