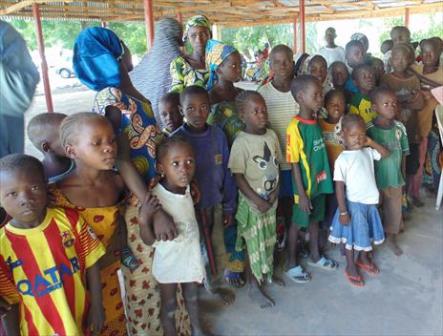 The United Nations Children Fund (UNICEF) has confirmed that no fewer than 800,000 children have been forced to flee their homes as a result of the conflict in northeast Nigeria between Boko Haram, military forces and civilian self-defence groups.
According to a new report from UNICEF,one year after the abduction of more than 200 schoolgirls in Chibok, missing Childhoodsreveals that the number of children running for their lives within Nigeria, or crossing over the border to Chad, Niger and Cameroon, has more than doubled in just less than a year.
“The abduction of more than 200 girls in Chibok is only one of endless tragedies being replicated on an epic scale across Nigeria and the region,” says Manuel Fontaine, UNICEF Regional Director for West and Central Africa. “Scores of girls and boys have gone missing in Nigeria – abducted, recruited by armed groups, attacked, used as weapons, or forced to flee violence. They have the right to get their childhoods back.”
The figures come as UNICEF draws attention to the devastating impact of the conflict on children across the region using the hashtag #bringbackourchildhood.
As part of this drive, UNICEF is using Snapchat – a social platform where messages disappear – to highlight the plight of the hundreds of thousands of children who are missing out on their childhoods as a result of the conflict.
To tell the stories of the children who have fled the violence, UNICEF and leading Snapchat artists will share images based on drawings from children in Nigeria, Chad, Niger and Cameroon.  The artwork reflects what children miss from home and the emotional wounds and suffering they have endured, including seeing their parents and siblings killed, tortured or abducted.
The public will also be invited to share what they would miss most if they were forced from home – either on Snapchat, or on other social channels using the hashtag #bringbackourchildhood.
Missing Childhoods outlines how the conflict is exerting a heavy toll on children in Nigeria and across the region in an increasing number of ways:
· Children are being used within the ranks of Boko Haram – as combatants, cooks, porters and look-outs.
· Young women and girls are being subjected to forced marriage, forced labour and rape.
· Students and teachers have been deliberately targeted – with more than 300 schools damaged or destroyed and at least 196 teachers and 314 schoolchildren killed by the end of 2014.
UNICEF has stepped up its humanitarian response to the crisis.   Over the past six months, UNICEF has provided over 60,000 children affected by the conflict in Nigeria, Niger, Cameroon and Chad with counselling and psychosocial support to help them ease the pain of their memories, reduce stress and cope with emotional distress.
UNICEF is also working with partners to provide safe water and life-saving health services, restore access to education by creating temporary learning spaces, and deliver therapeutic treatment to malnourished children.
Faced with a severe funding shortfall, UNICEF is urging international donors to ramp up their financial support for relief efforts in Nigeria and the neighbouring countries. UNICEF has received only 15 per cent of the US$26.5 million required for its humanitarian response in Nigeria for 2015, and no more than 17 per cent for its overall humanitarian funding appeal for Cameroon, 2 per cent for Niger and 1 per cent for Chad.
[myad]