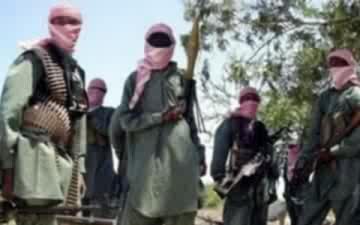 Boko Haram militants have kidnapped 506 youths, including women and children from the town of Damasak in Borno State. Though there has been no official confirmation of the figure, but a trader who gave his name as Souleimane Ali confirmed that Boko Haram militants took 506 young women and children (in Damasak) and that they killed about 50 of them before leaving.
“We don’t know if they killed others after leaving, but they took the rest with them.”
Ali said that his wife and three of his daughters were among those kidnapped, saying: “two of them were supposed to get married this year. Boko Haram said ‘they are slaves so we’re taking them because they belong to us’,” he said.
Mohamed Ousmane, another trader, said the militants took his two wives and three of his children.
A 40-year-old resident who gave her name as Fana said fighters had rounded up captives in the main mosque before taking them out of town. She said she saved her two children by hiding them in her house.
Ali said he was just hoping life would return to normal, adding: “we’ve seen the worst possible things you can imagine, so after a certain point there was no point in trying to leave.
“They killed all our friends, our family members, so we just submitted ourselves to God.”
[myad]