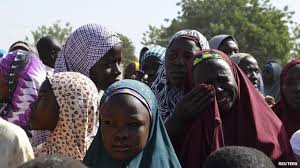 Some of the schoolgirls abducted by members of the deadly Boko Haram Nigeria are believed been forcefully married off to themselves at the bride-price cost of N200 each and have transported them to neighbouring countries, including Chad and Cameroon.

A local leader, Pogo Bitrus told the British Broadcasting Corporation (BBC) that he sighted some gunmen crossing with the girls into Cameroon and Chad as he confirmed that some of the girls have been forced to marry the militants.

Bitrus who is a Chibok community leader, said that 43 of the girls had “regained their freedom” after escaping, while 230 are still in captivity.

“Some of them have been taken across Lake Chad and some have been ferried across the border into parts of Cameroon,” he told the BBC.

“And then we got this information that the captors went and auctioned these girls into marriage for a bride price,” he added.

The students who were about to sit for their final year exam are mostly aged 16-18.