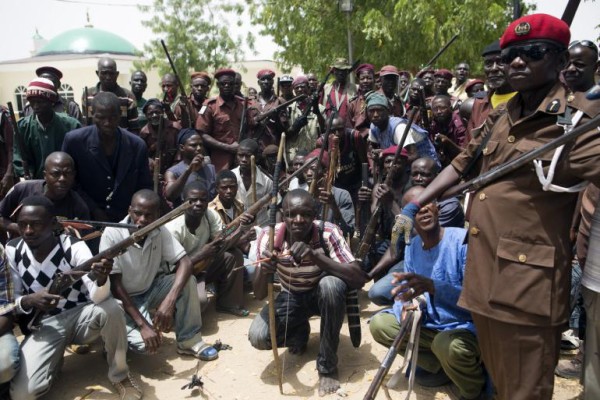 There are reports that indicate the gathering of members of the Boko Haram in their stronghold of Gwoza and bringing in reinforcements from other locations for what security observers described as an epic and final battle for supremacy with the Nigerian soldiers and their allies..

An intelligence source who is monitoring the situation told Voice Of America (VOA) today that military forces are getting closer to the town and the militants may be preparing to defend Gwoza, which is one of the last major towns they control in northeastern Nigeria.

The source says Boko Haram reinforcements are traveling to Gwoza from their refuge in the nearby Sambisa forest. Gwoza is located about 135 kilometers south of the Borno state capital, Maiduguri.

The militants are said to have surrounded the town with land mines and warned civilians to flee. It says the fighters have released some young women they have been holding.

VOA’s source says earlier this week, militants in Gwoza killed some civilians who refused to take up arms with Boko Haram to defend the town.

The offensive is being aided by forces from Niger, Cameroon and Chad, all of whom have suffered Boko Haram attacks on their territory.

On Thursday, it was reported that Boko Haram militants killed at least 68 people in a raid on the Borno state village of Njaba. A survivor of the attack told VOA that gunmen killed all the men and teenage boys in the town, including children as young as 12 years old.

Because of the remoteness of the area, word of the attack took two days to reach the state capital, Maiduguri, about 100 kilometers away.

Meanwhile, report just reaching us indicated that three explosions hit Maiduguri today in the worst attacks there since suspected Islamist militants tried to seize it in January.

There was no immediate official word on casualties. A hospital source said dozens had been killed in the separate explosions and witnesses saw bodies being taken away from different blast sites.

A tricycle rider with a bomb tried to enter a fish market on the Baga road in the west of Maiduguri. The bomb exploded when the tricycle was prevented from going in, Mohammad Ajia, a trader in Baga market, said after fleeing the scene.

A second blast then hit an area known as the Monday market before a car bomb exploded by a bus station near a Department of State Security (DSS) office, according to a civilian member of a joint task force.

“Men from the anti-bomb squad came a few minutes after the blast to comb the scene, then they started evacuating victims. I saw five mangled bodies being put in vehicles,” Aliyu Musa, a resident in the area near the DSS office, said.

Near the Monday market, casualties were loaded onto waiting ambulances.

“I have counted five ambulances that have evacuated victims from the scene. Soldiers are shooting in the air and warding off people at the market,” Salisu Yaya, a member of a civilian task force said.

Suspected Boko Haram militants tried to seize the city at the end of January but were repelled in fighting that killed more than 100 people.

Boko Haram seized territory the size of Belgium last year, which Nigeria army has struggled to take back. [myad]