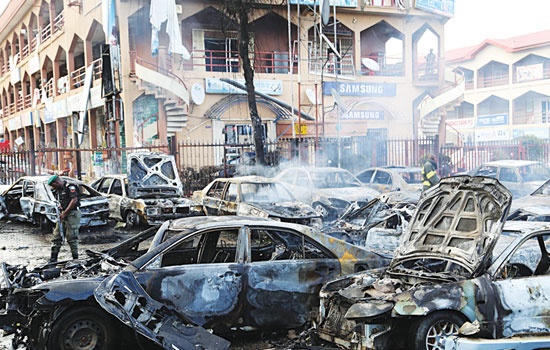 “In a civil war, you know the battle line … you know where to run to. But this one (Boko Haram), the enemies are in your pocket.”

These were the words of President Goodluck Jonathan on Wednesday, just a few hours before the bomb explosion occurred at Emab Plaza in Wuse 11, Abuja. He addressed a delegation of African bishops at the Aso Presidential Villa shortly before he flew to Equatorial to attend African Union summit.

Boko Haram, the President said: “is even worse than the civil war” against Biafran secessionists that killed a million people In the 1960s.

The Wednesday bomb blast by suspected Boko Haram, made the President to cut his trip to Equatorial Guinea short.

Visiting the scene of the bomb blast today, Jonathan regretted that Nigeria has entered one of the darkest phases of its history.

“This is one of the darkest phases in the history of our nation but surely we will get over it,” Jonathan said in front of the cordoned area, still littered by rubble and charred cars.

“It is extremely painful that when some Nigerians are … working hard to take care of their families and train their children, others are busy planning to kill people, and intimidate others.”

Wednesday’s bomb attack was the third on the capital since April, but the other two – car bombings of a bus station and street both in the suburb of Nyanya that killed about 90 people between them – did not strike at the heart of the city. [myad]