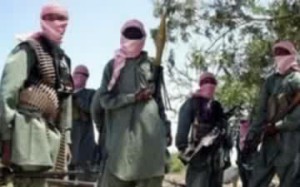 Also two people suspected to be members of vigilante youth, the civilian version of Joint Task Force were dragged from their houses to a river bank in Gamboru Ngala border town with Cameroon Republic and slaughtered by suspected terrorists group.

This is even as two people suspected to be motorist and passenger were ambushed and shot dead along Maiduguri – Gamboru Ngala road.

The Maiduguri – Gamboru Ngala road came under attack today by terrorists with the blowing of the bridge linking the town with Cameroon Republic.

Senator Ahmed Zanna Representing Borno Central has confirmed the slaughtering of the two members of the vigilante youth in Gamboru Ngala. [myad]